browngrotta arts: A Favorite of Insomniacs and Those Stuck at Home

As we all hunker down and prepare to do things in new — and safer — ways, we wanted to remind you that browngrotta arts has been offering art content online for many years. Check us out in your down time:

Learn more about How Artists Work in our Process Notes posts, about Artsy Locations and Exhibitions in our Dispatches posts and Read Like an Artist by checking out Books Make Great Gifts roundups. More popular posts: Two on Stitching on the Silver Screen — about movies that feature knitters and weavers and stitchers.

Every Monday we post a video link.
Some worth revisiting or viewing for the first time: The house favorite award-winning “Textile Magicians” about five Japanese contemporary fiber artists who live in the cedar forests near Kyoto. See it here: https://vimeo.com/139602030.
“Visionaries: Season 2, Episode 10” featuring Kay Sekimachi, Jack Lenor Larsen , Forrest Merrill on art and innovation on PBS: https://www.pbs.org/video/visionaries-anoopg/.

In honor of of Asia Art Week 2020 this March, browngrotta arts has collated contemporary works by 12 artists born in Japan and Korea for an online exhibition, Transforming Tradition: Japanese and Korean Contemporary Craft. The works include ceramics, weavings, baskets and sculptures made of paper and silk.

Notable in the exhibition are paper sculptures by Naomi Kobayashi and an elegant silk thread assemblage by her late husband, Masakazu Kobayashi. The couple often collaborated, working on installations that combined elements created by each of them. “These works express a shared vision and such common themes as the tranquility of nature, the infinity of the universe and the Japanese spirit,” Masakuzu once explained. “Naomi and I work in fiber because natural materials have integrity, are gentle and flexible. In my own work, I search for an equilibrium between my capacity as a creator and the energy of the world around me.”

Keiji Nio’s interlaced wall work is inspired by a haiku, Rough Sea of Sado, from Japanese haiku master Matsuo Basho’s haiku series. In it, Basho describes the deep blue waves of the Sea of Japan as they are reflected in the night sky and the light blue waves hitting the beach. The work incorporates ribbons on which Nio has screened images from the sea and tiny pebbles from the shore. Nio is a faculty member at the Kyoto University of Art & Design, who combines industrial and natural materials in his works to make statements about nature and man’s relationship to the world.

You can view Transforming Tradition: Japanaese and Korean Contemporary Contemporary Craft Online by visiting browngrotta arts’ You Tube channel at: https://youtu.be/uPzR-5EXyGI . You can see each individual work in the exhibition on Artsy: https://www.artsy.net/show/browngrotta-arts-transforming-tradition-japanese-and-korean-contemporary-craft and learn more about the artists included by visiting arttextstyle http://arttextstyle.com and browngrotta arts’ website: http://www.browngrotta.com

about browngrotta arts
browngrotta arts represents the work of more than 100 international contemporary textile and fiber artists. The firm has published 49 art catalogs and placed art work in dozens of private and corporate collections in the US and abroad, as well as in the permanent collections of the Metropolitan Museum of Art, Museum of Arts and Design, the Art Institute of Chicago, the Philadelphia Museum of Art, and the Renwick Gallery of the Smithsonian Museum. browngrotta arts’ website, http://www.browngrotta.com, and its blog, http://arttextstyle.com, are destination sites for art consultants, interior designers, collectors and practitioners.

Most Influential Art Movements of the Decade

Last month, Artsy identified the most seven most influential art movements of the decade in The Art Movements of the 2010s (Dec 18, 2019) by Charlotte Jansen https://www.artsy.net/series/decade-art/artsy-editorial-art-movements-2010s. Two of those identified by Jansen — the reconsideration of women artists, which the Artsy called “an art history overhaul” and the art world’s embrace of craft — are two we at browngrotta arts have also watched with more than passing interest for the past 10 years.

The article points to the Guerrilla Girls survey in 2016, which found an unsurprising, yet overwhelming, bias towards Western male artists, which curators and galleries have since been working to address in exhibitions such as Women of Abstract Expressionism. We would add several exhibitions to that list, including Woman Take the Floor, currently at the Boston Museum of Fine Arts; Pathmakers: Women in Art, Craft and Design, Midcentury and Today at the Museum of Arts in Design in 2015, Ethel Stein’s one-person exhibition at the Art Institute of Chicago in 2015 and Lenore Tawney’s current four-part retrospective at the John Michael Kohler Art Center in Wisconsin. The article also mentions overlooked women artists already in their 70s, 80s and 90s who have gained representation with blue-chip galleries, specifically, Rose Wylie joined David Zwirner 2017; Luchita Hurtado joined Hauser & Wirth in 2018;  Howardena Pindell joined Victoria Miro in 2019. Carmen Herrera, now 104, started working with Lisson in 2009 and opened a retrospective at the Whitney in 2016. We would add Françoise Grossen who joined Blum & Poe in 2015.

The “return of craft” has brought greater attention to women artists, too. Jansen notes it has placed greater focus on forgotten legends such as Anni Albers, and living talents like Sheila Hicks. In November, Jansen points out, the Whitney mounted Making Knowing: Craft in Art, 1950–2019, on view through next January. Enthusiasm for ceramics has grown, too, she writes, as audiences continue to gravitate towards works by California Clay.

Movement artists Ken Price, Peter Voulkos and Ron Nagle as well as the late Betty Woodman. We’d also point to interest in ceramist Toshiko Takaezu, whose work was included in both Pathmakers: Women in Art, Craft and Design, Midcentury and Today and Women Take the Floor.

“Craft techniques are some of the oldest media in human history,” Jansen concludes, “but this decade has proved there is still boundless inspiration to be found in them.” 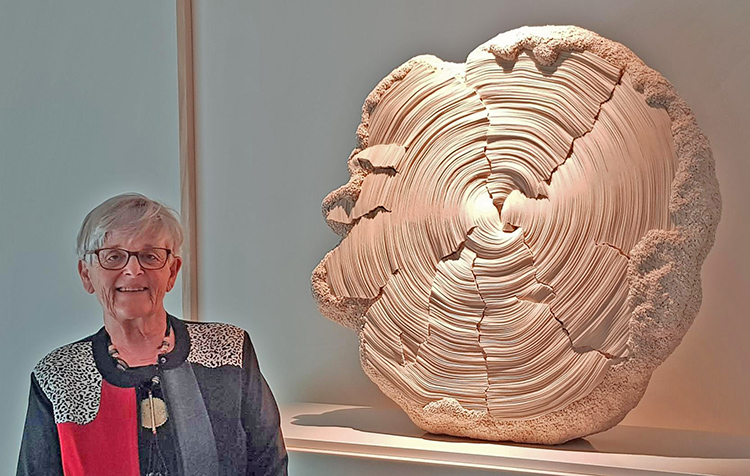 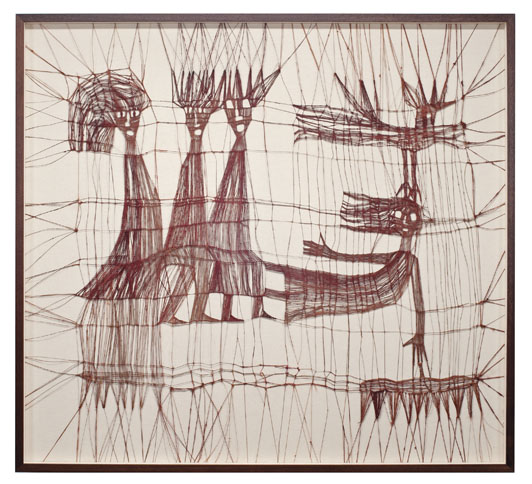 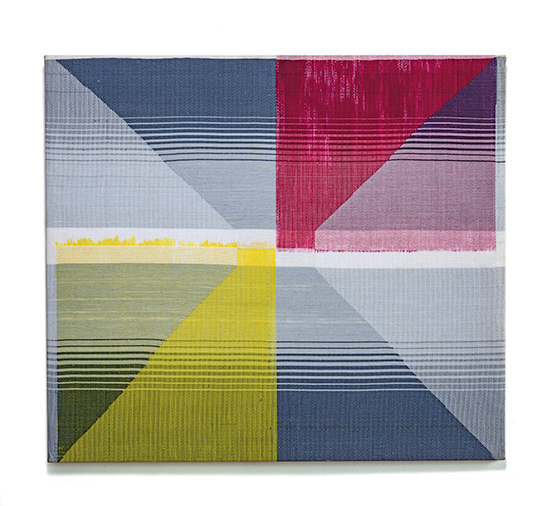 These artists continue their explorations though their seventies, eighties and nineties. An example, Kay Sekimachi, who created complex, elegant monofilament weavings in the 70s and 80s, bowls and towers of paper after that, and continues, at age 90, to create elegant weavings of lines and grids that are reminiscent of the paintings of Agnes Martin. After having received the Special Mention Loewe Craft Prize and exhibited at the  Design Museum of London, this year, Simone Pheulpin continues to create innovative work in her 70s, work that is part of the 10th contemporary art season at Domaine de Chaumont sur Loire and part of the exhibition “Tissage Tressage” at the Fondation Villa Datris. 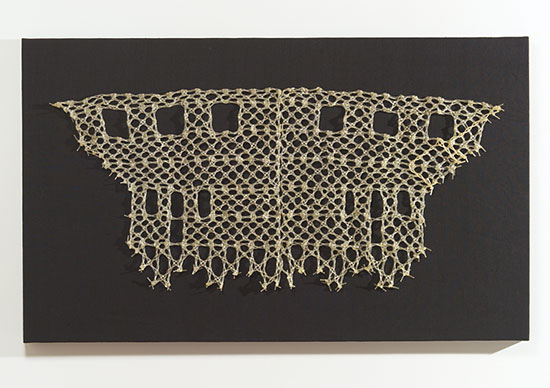 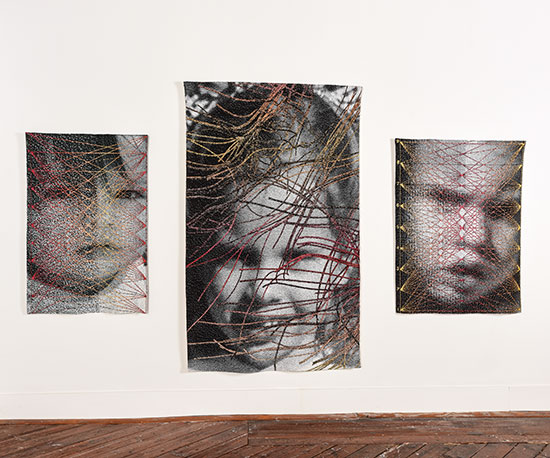 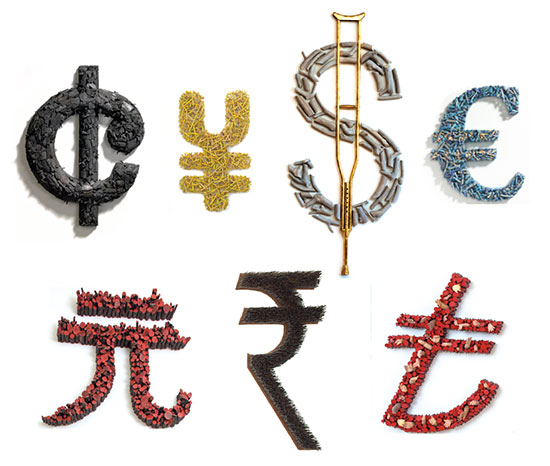 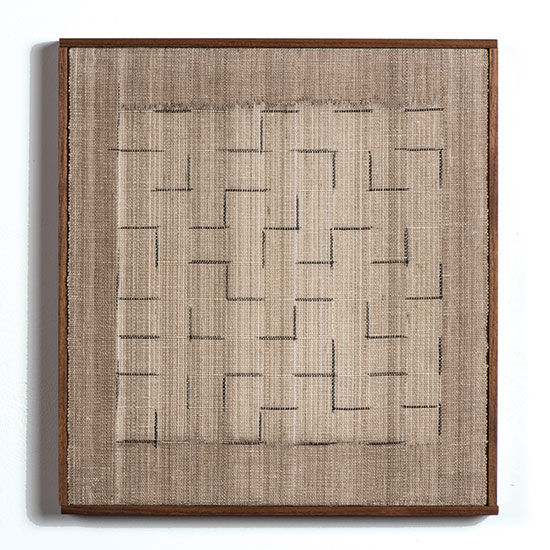