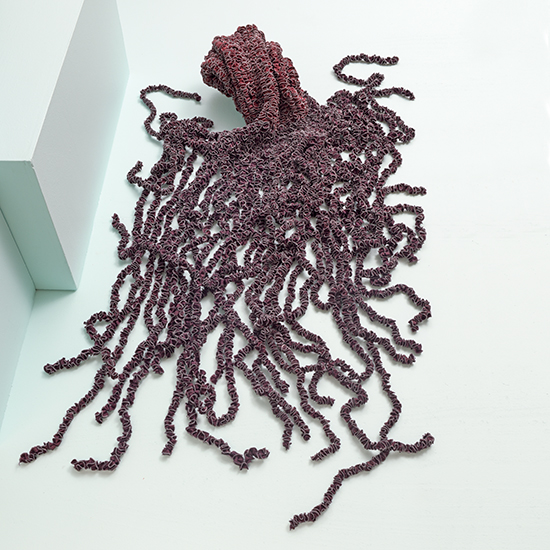 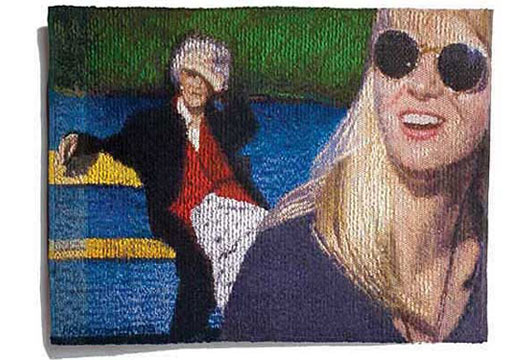 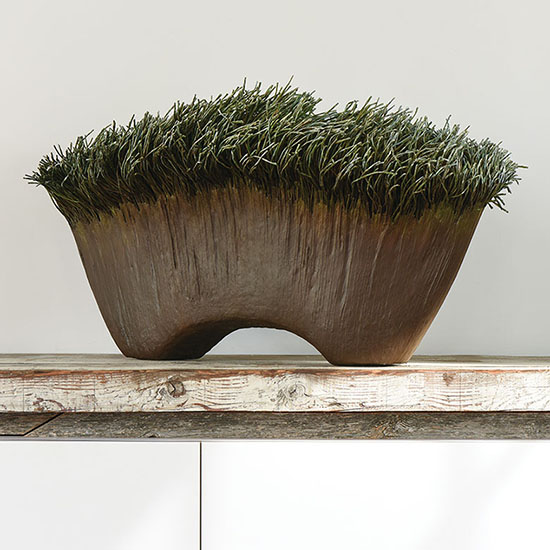 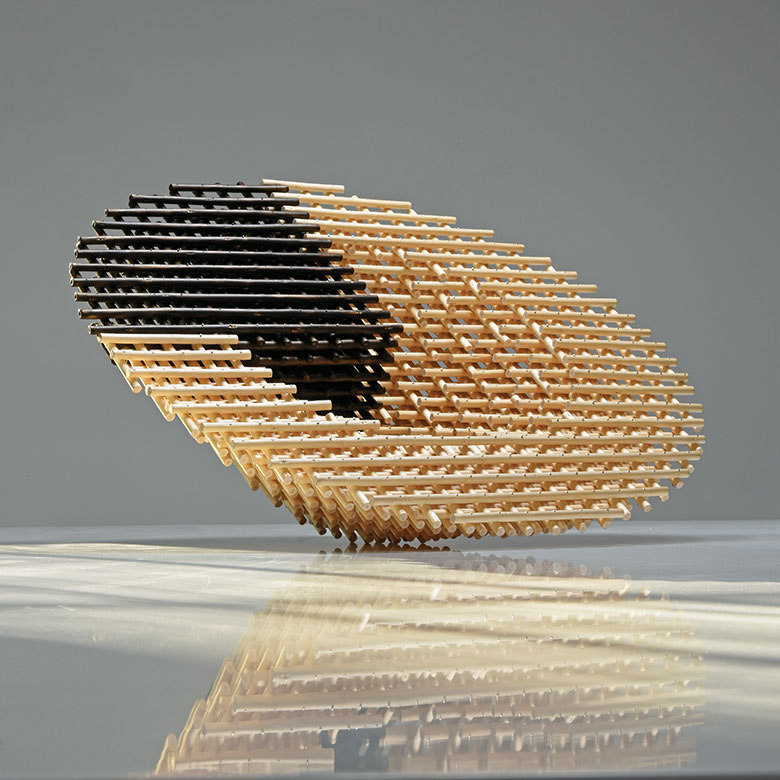 Artist in the House: Jane Balsgaard from Denmark

Browngrotta arts’ artist Jane Balsgaard recently visited the gallery on her way to the opening of Plunge: explorations from above and below at the New Bedford Art Museum. Balsgaard, a native of Denmark, has been very busy lately. In addition to participating in both Plunge and our 30th Anniversary Exhibition, Still Crazy After All These Years…30 years in art, Balsgaard has just completed a lofty commission for the Hotel Bretagne located in Hornbaek, Denmark. 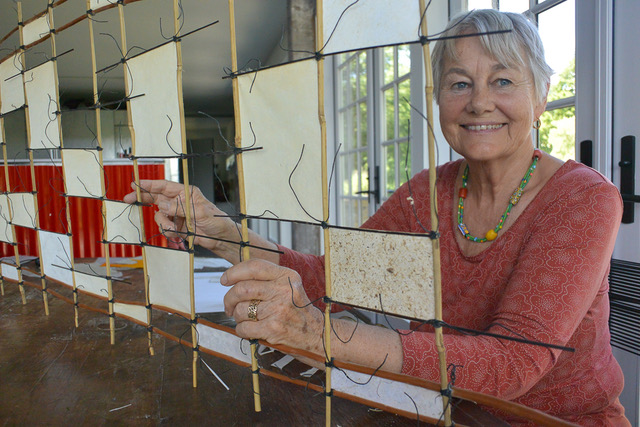 Jane Balsgaard holding “Deck,” a new piece she made while visiting browngrotta.
Photo by Tom Grotta

For the Hotel Balsgaard was commissioned to create something to adorn a 29.5 ft wall facing the Hotel’s staircase. Gallery Hornbaek owner, Susanne Risom, saw Balsgaard’s work as a solution to the immense design dilemma. Balsgaard’s installation, titled Waterfall, consists of 18 reliefs, one sculpture, and one relief in the ceiling, all made with natural materials. 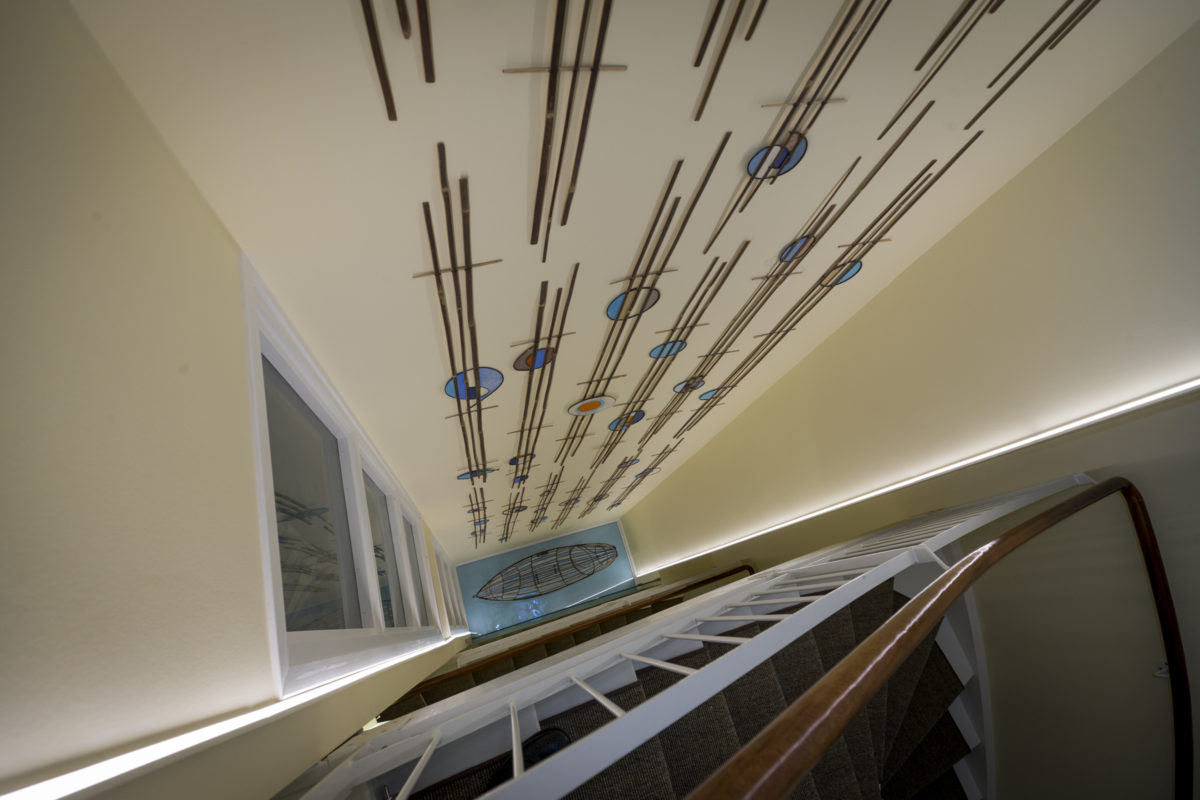 Looking down Jane Balsgaard’s “Waterfall” at the Hotel Bretagne.

The reliefs, varying in length, stretch down the length of the wall creating a straightforward course for the eye to follow. In a statement for Gallery Hornbaek, which assisted in arranging the commission, Art Historian Johan Zimsen Kristiansen explains that the “in the transition between pins, a number of small harmoniously matched fractures and character, along with transparent dots or bubbles of colored paper, all contribute to creating the falls’ dynamics,” and connect the once problematic space. 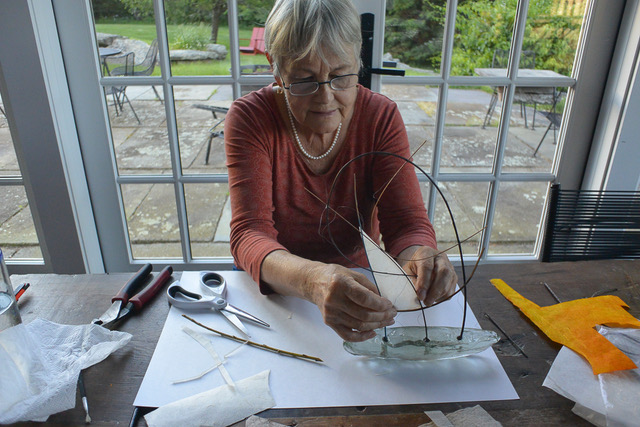 During her visit at browngrotta arts in Connecticut, Balsgaard worked on a new piece called Wilton Boat, a 12.5” x 11” x 1.5” sailboat made from glass and natural materials, which she sourced fro her yard in Denmark and ours in Wilton.

You can see Jane Balsgaard’s newest works in in browngrotta arts’ online exhibition Cross-Currents: Art Inspired by Water and at the Plunge exhibition through October 8th and of course, by booking a stay at the Hotel Bretagne. 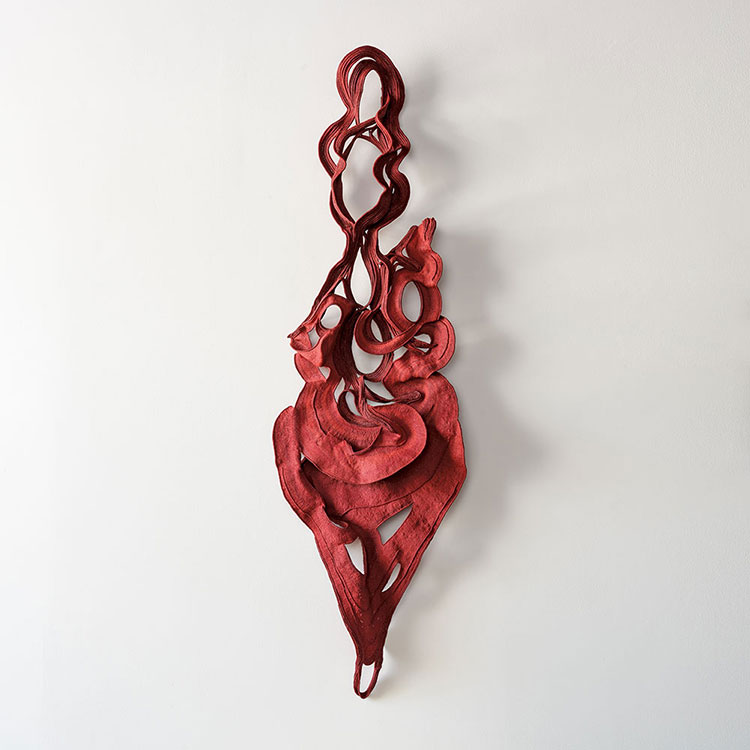 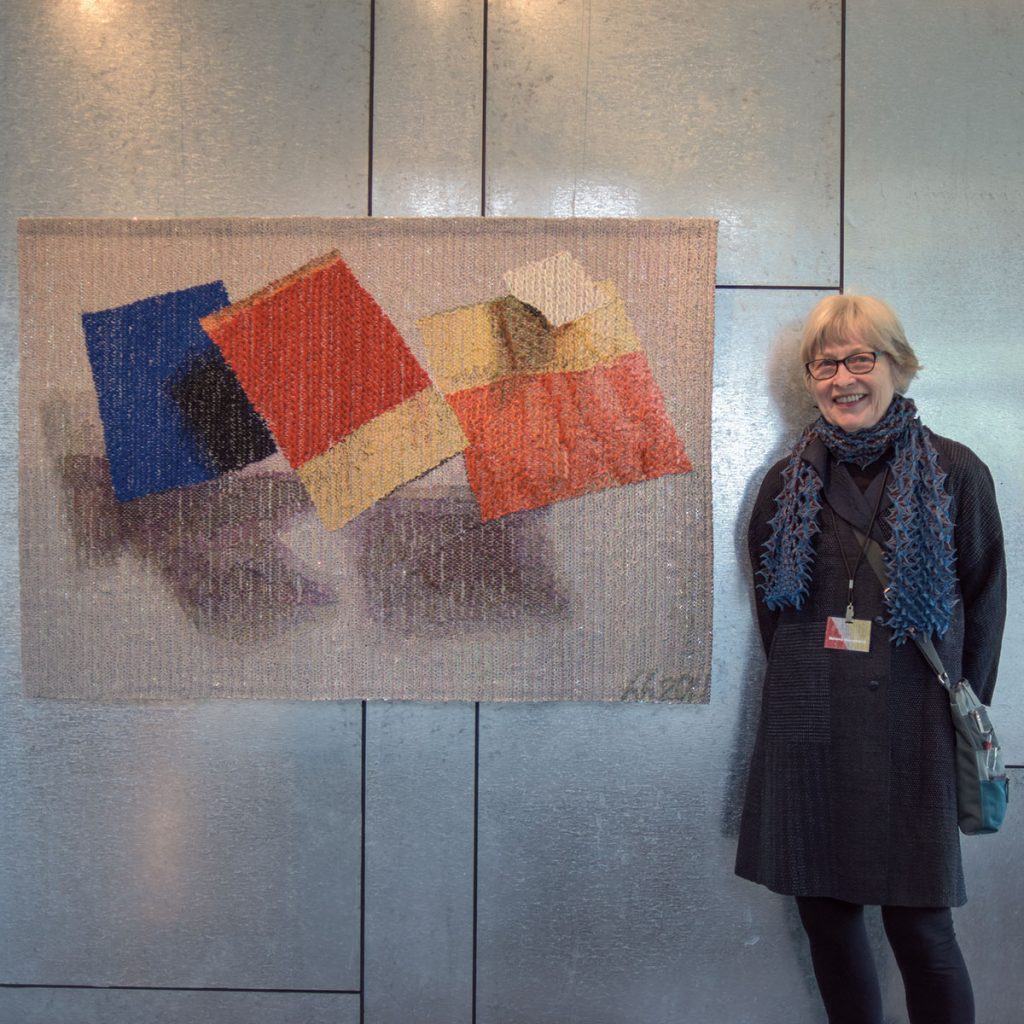 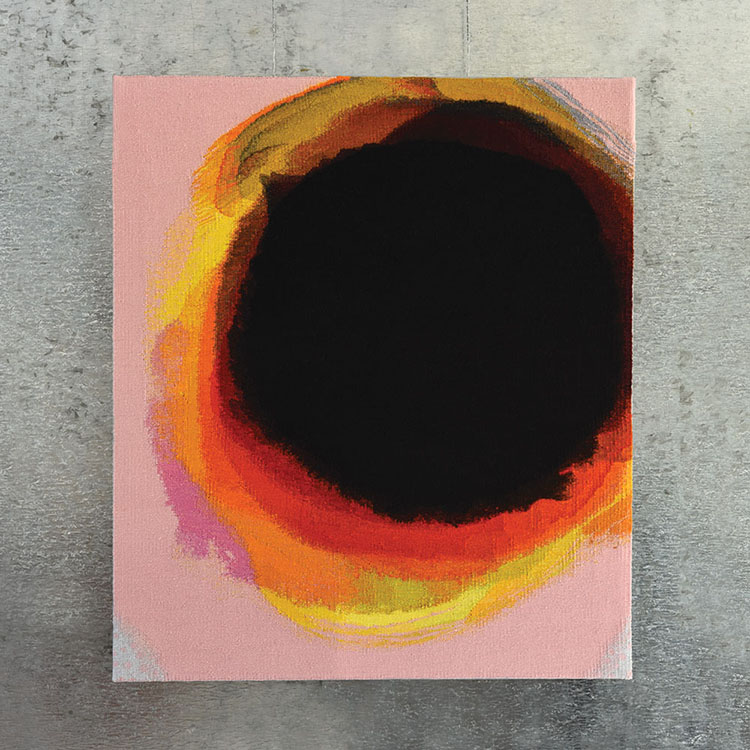 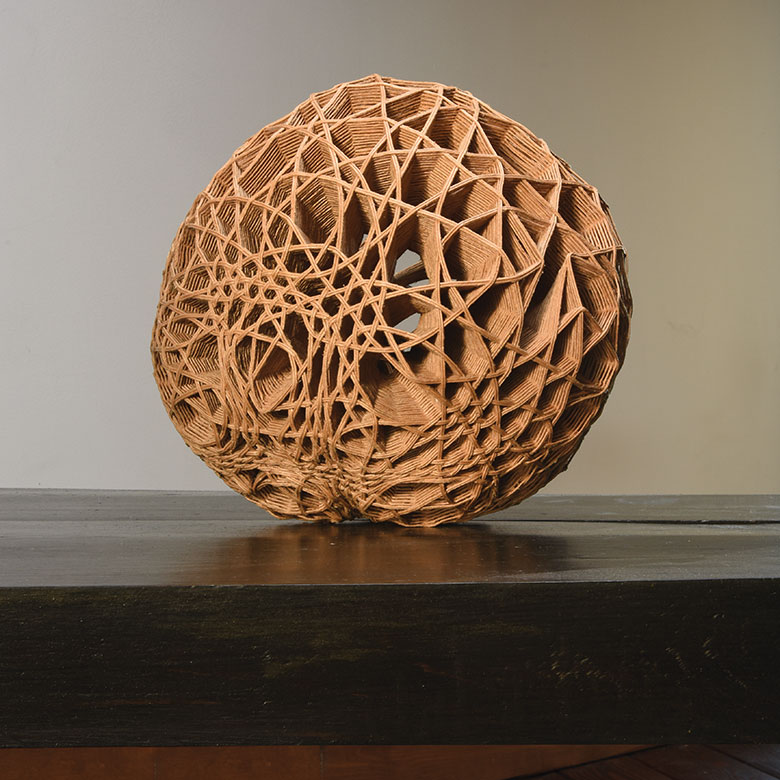 Rippling, roiling, teeming with life… Deep, dark, waiting to be explored…
Water has long been a potent influence for artists wishing to explore its majesty and mystery.

For the last several months, browngrotta arts has worked with Jamie Uretsky, Curator and Noelle Foye, Executive Director of the New Bedford Museum of Art/ArtWorks! in Massachusetts. Plunge: explorations from above and below, which examines the influence of water in the work of 16 artists from around the world, is the result. 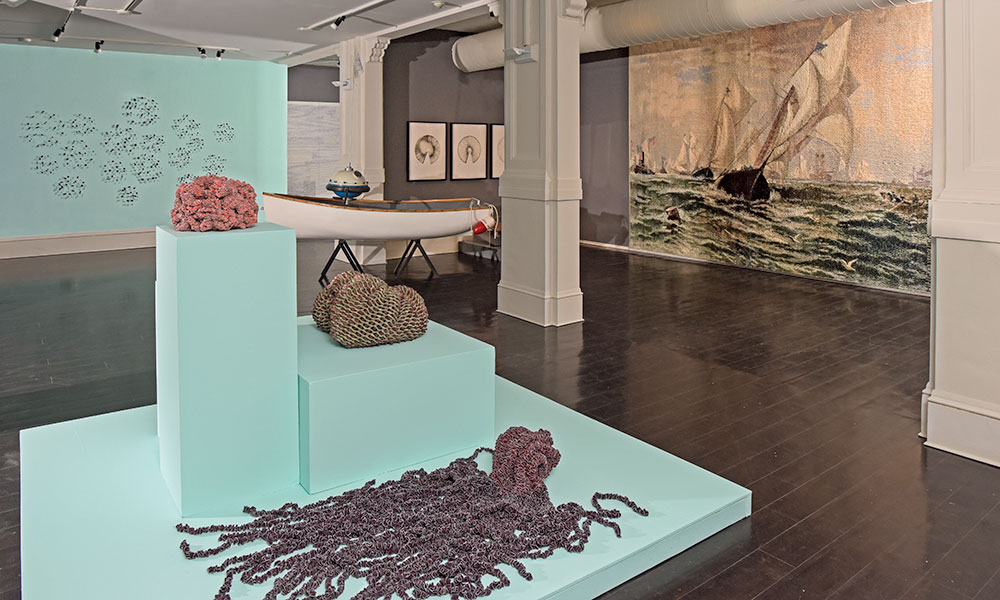 Plunge explorations from above and below installation

The multifaceted exhibition combines sculptures, tapestries, installation works, paintings and photography. Each work resides at the intersection of the maker’s fascination with a variety of nautical and natural themes and the artmaking process. Plunge pairs Helena Hernmarck’s monumental woven depiction of tall ships in New York Bay 1884 and Chris Drury’s Double Echo, a print that superimposes a fragment of an echogram from Flight W34 over East Antarctica and an echocardiogram of the pilot’s heartbeat. In other galleries, Heather Hobler’s meditative photographs of seascapes join Karyl Sisson’s “sea creatures” made of domestic objects like zippers and clothespins; Christopher Volpe’s evocative paintings join Grethe Wittrock’s Arctica, a sculpture made from a repurposed sail from the Danish Navy. Unlike most musuem exhibtions, the works in Plunge are all available for sale.

Thirteen of the artists in Plunge, representing five countries, are represented by browngrotta arts: Dona Anderson; Jane Balsgaard; Annette Bellamy; Marian Bijlenga; Birgit Birkjaaer; Chris Drury; Helena Hernmarck; Lawrence LaBianca; Sue Lawty; Judy Mulford; Karyl Sisson; Ulla-Maija Vikman; Grethe Wittrock. Their work, and that of the three other artists in the exhibition, Heather Hobler, Anne Leone and Christopher Volpe, will be included in the catalog for the exhibition, designed and photographed by Tom Grotta. It will be available beginning June 5th at www.browngrotta.com.

Plunge’s opening is tonight Friday, June 2nd at the New Bedford Museum of Art from 6 p.m. to 8 p.m. Jane Balsgaard, one of the artists in Plunge, will attend from Denmark.