Home / Aldrich Museum of Contemporary Art / Exhibitions / Uncategorized / Behind the Scenes: Drop Off at Helena Hernmarck’s

Behind the Scenes: Drop Off at Helena Hernmarck’s

Behind the Scenes: Drop Off at Helena Hernmarck’sSeptember 7, 2018 arttextstyle
Aldrich Museum of Contemporary ArtExhibitionsUncategorized
0 Comment 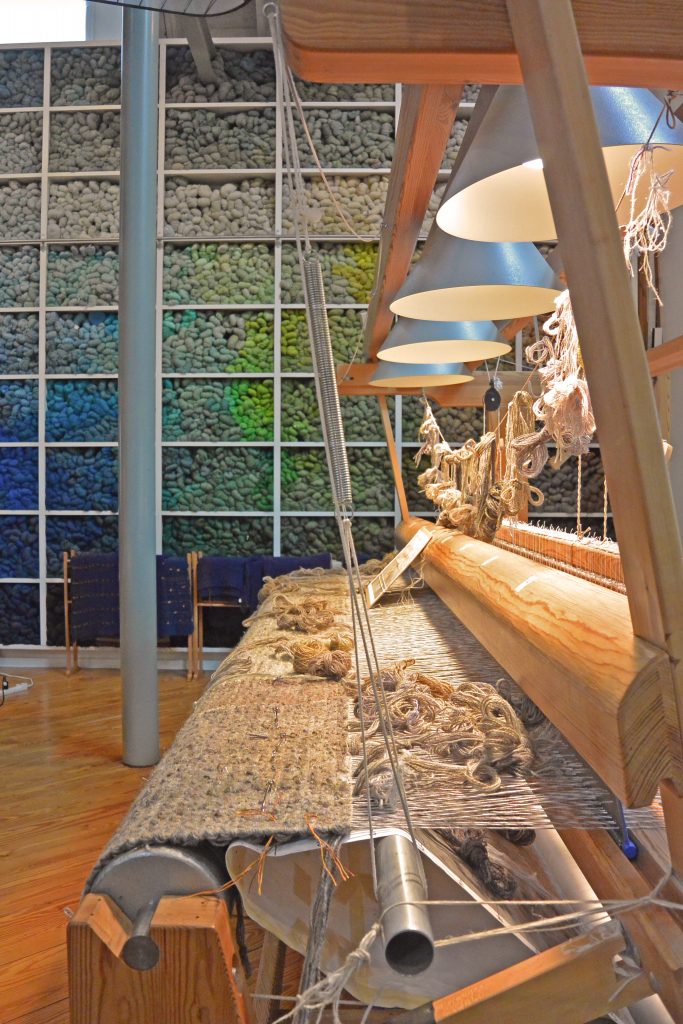 We recently took a trip up to Helena Hernmarck’s studio to loan back a few pieces for her upcoming solo exhibition Helena Hernmarck: Weaving In Progress at the Aldrich Museum. Located in Ridgefield, Connecticut, Helena’s studio is only a few miles from browngrotta arts.

A perfectly organized wall of color expands the entire length of the south side of Hernmarck’s studio. The wall acts as a storage for skeins of wool Hernmarck uses in her tapestries. The different skeins are precisely organized by their unique colors and tones, making it easier for Hernmarck to find a specific color when needed. Hernmarck is very particular about the quality of the materials she uses in her work. All the wool she uses is
rya wool, sourced from a specific breed of heirloom sheep in Sweden. The wool is also custom-dyed and spun to her specifications at a family-run spinning mill in Sweden, the place Hernmarck called home before emigrating to Canada, the UK and then settling in the US. Hernmarck has worked with browngrotta arts for more than 20 years, her work is included in 11 of browngrotta arts’ catalogs, including Helena Hernmarck and Markku Kosonen from 1994. Her commissions are found in dozens of corporations, museums and private collections. 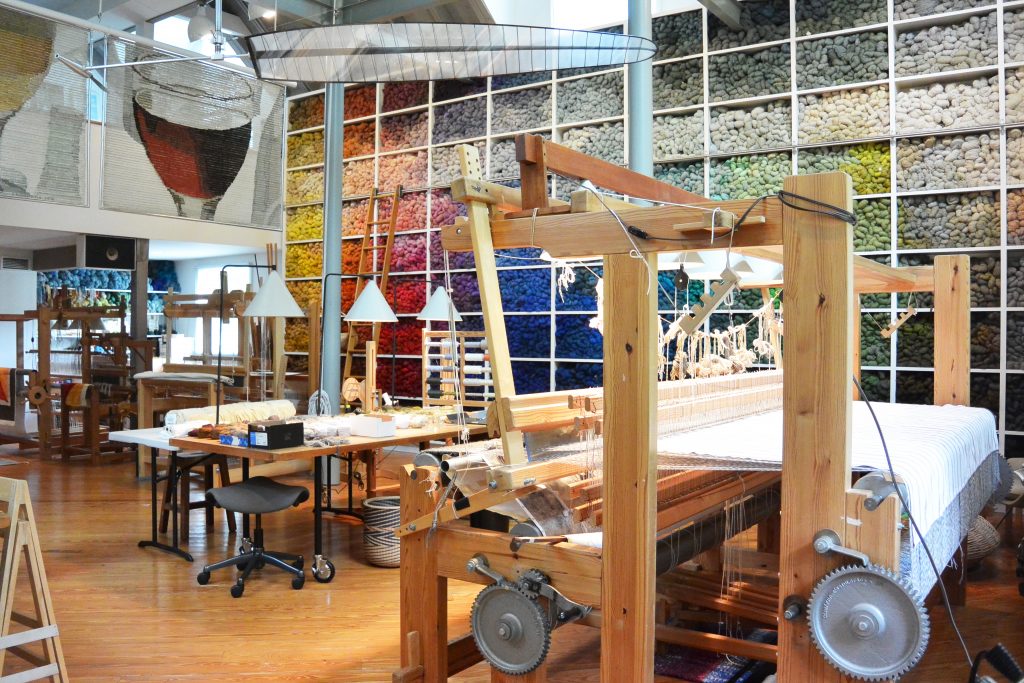 Watching Hernmarck work leaves one in awe. Using a technique of her own invention, she is able to conjure details from our visual world, such as sunlight on waters and sails swelling in the wind. Every one of Hernmarck’s tapestries begin with an image, which is then blown up into her desired weaving size. From there, Hermarck plots her working plan on graph paper and produces a certain number of linear inches or feet per day so her commissions are completed on time. This technique allows Hermarck to capture even the smallest details in her weavings. Hernmarck’s attention to detail and her ability to portray subtle color variations, reflections and shadows are extraordinary. From a distance, Hermarck’s weavings look as if they are a single printed blown up photograph. On closer inspection, however, the thousands of strings of wool dissolve into interlaced pieces of warp and weft. 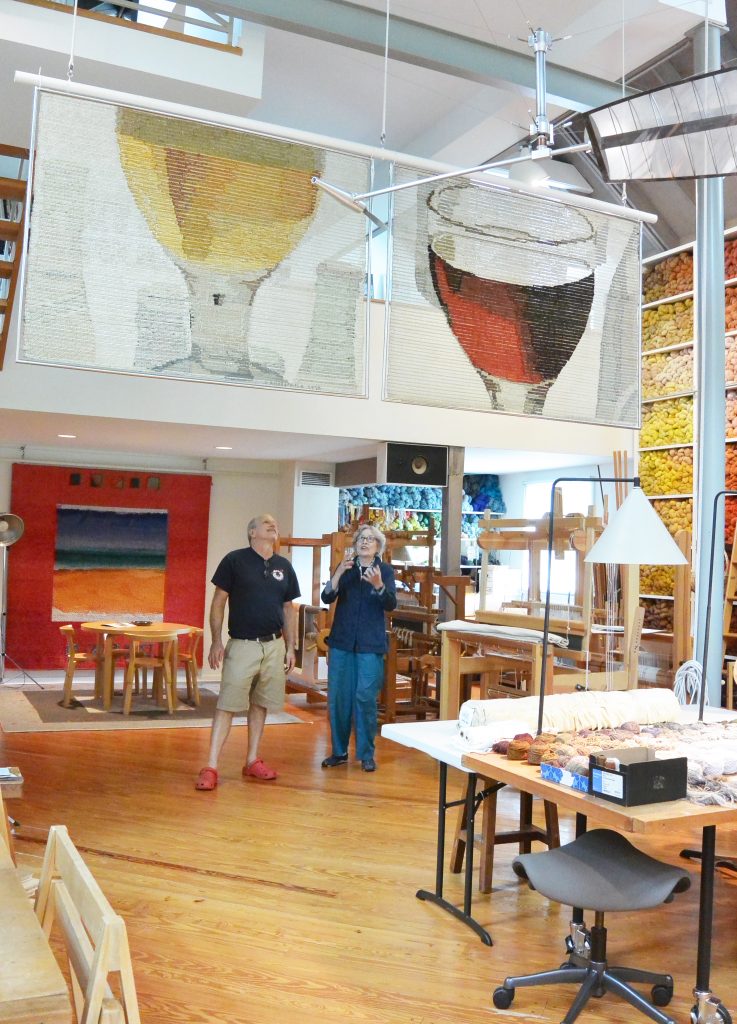 While visiting her studio, we also discussed her upcoming solo exhibition at the Aldrich Museum. Hernmarck never expected the Aldrich Museum’s invitation. “I did not expect to hear from them, after 38 years in town,” explains Hernmarck. “It was so positive that they were interested to show a textile artist in action. Things are changing…”Textiles have gained tremendous notoriety in the art world in recent years. Collectors, museums and art-lovers are becoming more aware of their allure.

Weaving In Progress will be the first solo exhibition of Hernmarck’s work in the United States since 2012. Given that the Aldrich is in Hernmarck’s hometown makes the exhibition all the more special. To be recognized for her accomplishments there is significant for Hernmarck. “It has been said that you can never be a prophet in your own land,” she explains.

In addition to presenting a variety of her work, Hernmarck herself will also be a part of the exhibition. During the exhibition, Hernmarck and her assistant Mae Colburn will create a work in situ, weaving three days a week in the exhibition space. The final work will be 55 inches wide and 40 inches tall, created on a five-foot-wide loom.“My assistant will be weaving with me as she is still in the learning curve,” Hernmarck says. Hernmarck’s aim for the exhibition is simple and direct. She hopes that “visitors will be inspired to do things with their hands and to get away from their computers” in this increasingly technology-focused world.