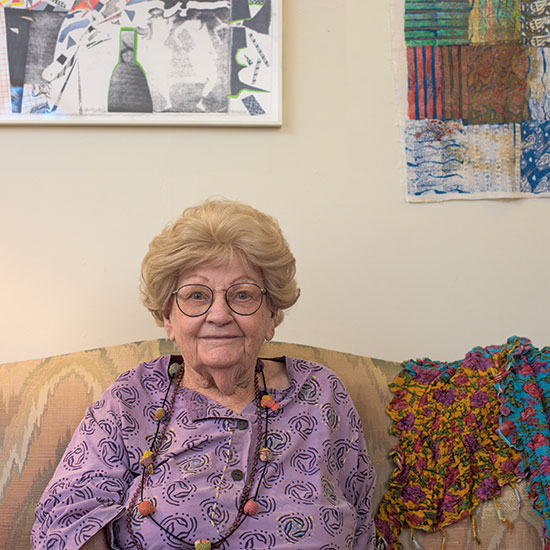 We lost two fine artists and friends this month when Ethel Stein passed away at 100 and Katherine Westphal died at home in Berkeley, California at 99.

We had been promoting Katherine Westphal’s work and that of her husband, Ed Rossbach (who died in 2002), since the 1990s. We visited Ed and Katherine at their home before Carter was born. (For those of you familiar with browngrotta arts that was a quarter of a decade ago.) Their home, and Katherine’s studio in particular, was a wonder – chockfull of items they had collected from their travels that pleased and inspired them, decorated with murals by Katherine on several walls. Though her studio appeared chaotic, Katherine had an encyclopedic knowledge of what was where. “That reminds of a piece of gift wrap I picked up in Tokyo in the 1950s,” she would say, and then pull a slim typing paper box from a stack of others that looked the same, finding there the images she was referencing.
Katherine worked for decades creating printed textiles, ceramics, quilting, tapestry, jacquard woven  textiles, artwear and basketry structures. “Variously using direct drawing and painting, batik wax resist, and shibori, she also pioneered color xerography and heat transfer printing on textiles,” Jo Ann C. Stabb, former faculty member at UC, Davis wrote in 2015 (“Fiber Art Pioneers: Pushing the Pliable Plane,” Retro/Prospective: 25+ Years of Art Textiles and Sculpture, browngrotta arts, Wilton, CT 2015). “Throughout her career, beginning with the batik samples she made for the commercial printed textile industry in the 1950s, she [ ] incorporated images from her immediate world: street people in Berkeley, Japanese sculpture, Monet’s garden, Egyptian tourist groups, Chinese embroidery, images from newspaper and magazine photos, and her dogs…anything that struck her fancy wherever she happened to be at the moment – and she could put any or all of them into a repeat pattern.  Her wit and whimsy [were] legendary and her lively approach also inspired her husband to combine imagery onto the surface of his inventive baskets and containers.” 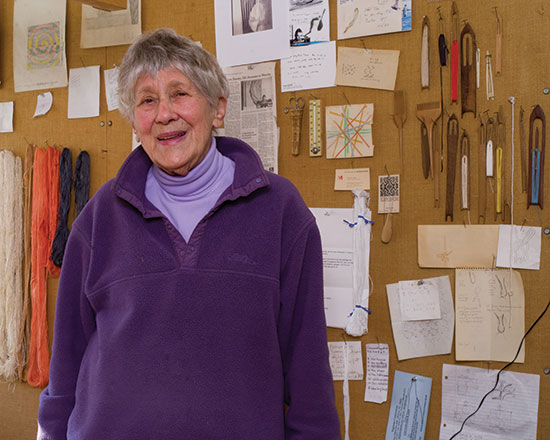 We were close to Ethel Stein as well, having begun representing her work in 2008 after a dinner at her home where her charming dog joined us at the table. When Rhonda was sick several years later, Ethel drove, at 93, from New York to Connecticut with a meal she had made us. Rhonda’s mother, a mere 83 then, was visiting and we told her that same vitality is what we expected of her in her 90s. (So far mom has complied.)
Tom was able to prepare a monograph of Ethel’s work, Ethel Stein: Weaver, with an introduction by Jack Lenor Larsen, an essay by Lucy A. Commoner and a glossary by Milton Sonday, which has become our best-selling volume. In her essay, “Ethel Stein, A Life Interlaced With Art, Lucy Commoner, then-Senior Textile Conservator at the Cooper-Hewitt, National Design Museum, Smithsonian Institution, describes the evolution of Ethel’s knowledge of textile techniques and ways in which she was able to advance those techniques through her own explorations. “Ethel Stein’s work is distinguished by its rhythmic simplicity belied by its extraordinary technical complexity. The basic humility and humanity of the work and its relationship to historical techniques combine to give Stein’s work a meaning far beyond its physical presence.” 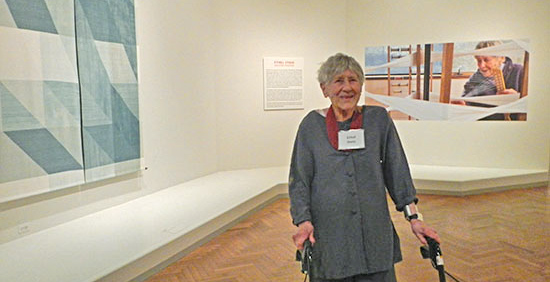 Six years later, Ethel’s work received the wider recognition it deserved. We were thrilled to attend the opening of her one-person exhibition, Ethel Stein, Master Weaver, at the Art Institute of Chicago in 2014. “Ethel Stein is an artist who only now, at the age of 96, is beginning to get the recognition she deserves from the broader public,” the Institute wrote. “Stein’s great contribution to weaving is her unique combination of refined traditional weaving techniques, possible only on a drawloom and used by few contemporary weavers, with modernist sensibilities influenced by Josef Albers, who trained in the German Bauhaus with its emphasis on simplicity, order, functionality, and modesty.” There were photos of her at work, a video and a dinner after with family members and supporters of the museum and crowds of visitors to the exhibition — a well-deserved tribute. 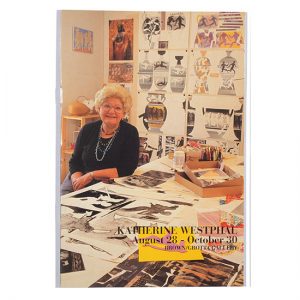 These artists and their lengthy careers, raise the question, is fiber art a key to longevity? Ethel Stein continued to weave even after she was discovered and lauded at 96. When we visited Katherine Westphal in Berkeley in 2015 we found her still drawing or painting every day in a series of journals she kept, something she continued to do until just a few weeks before her death. Lenore Tawney died at 100, Ruth Asawa and Magdalena Abakanowicz each at 87. Helena Hernmarck tells us that she knows several fiber artists who are 100. So those of you who are practitioners — keep it up!