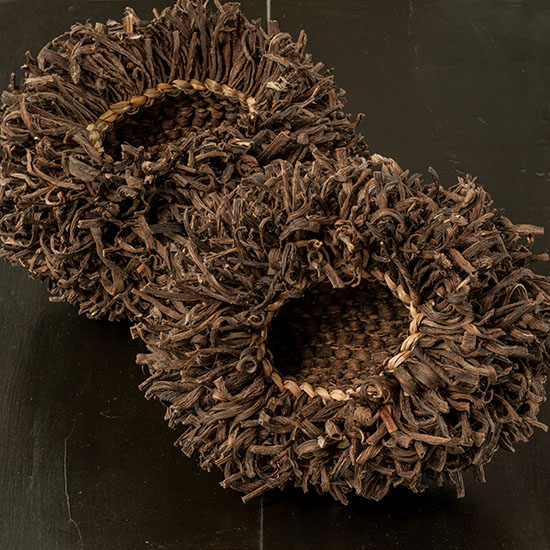 Tim Johnson, a sculptor of natural materials, is among the artists included featured in Influence and Evolution: Fiber Sculpture then and now, opening April 24th at browngrotta arts in Wilton, Connecticut and continuing until May 3rd. Like pioneer fiber artist Ed Rossbach, Johnson is an incessant experimenter — with material, technique, venue. Last November, for example, he spent several weeks exploring the pastures, cow tracks, streams and pathways that make up Briddlesford Lodge Farm 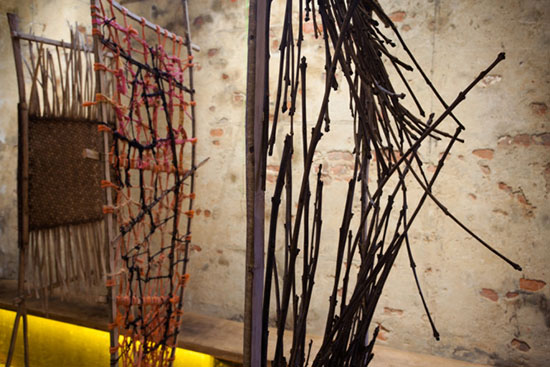 on the Isle of Wight. As the farm’s first Artist in Residence Johnson was invited to create the inaugural exhibition in the newly restored and architecturally re-designed Hop Kilns Heritage Center.Using a variety of materials gathered on the farm including Butcher’s Broom, Hazel, Honeysuckle, cow muck and bailer twine, he created a series of suspended panels that investigated the layered history of the land’s usage and geography. Black bailer twine is embroidered mapping out fields and pathways, twilled cane picks up patterns from an old winnowing fan in the heritage centre’s collection and Ash twigs reference the hedgerows, hurdles and coppiceing traditions of the island. “I am more than happy to admit the influence of makers such as Ed Rossbach, whose book, The New Basketry, I bought for the mighty sum of £1.50 when I was still a schoolboy in the 80s,” Johnson says. “While for many years the influence 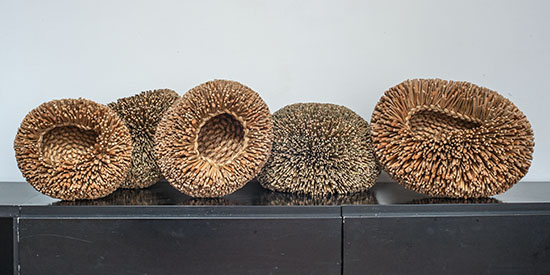 did not emerge in my work and I did not understand how to work with basketry techniques and materials, when I eventually started making baskets it was like coming home to the work I had always wanted to make.” A series of Johnson’s vessels, made of rush and Butterbur, will be featured in Influence and Evolution, which opens at 1pm on April 24th. The Artists Reception and Opening is on Saturday April 25th, 1pm to 6pm. The hours for Sunday April 27th through May 3rd are 10am to 5pm. To make an appointment earlier or later, call: 203-834-0623.

One Response to Influence and Evolution Introduction: Tim Johnson