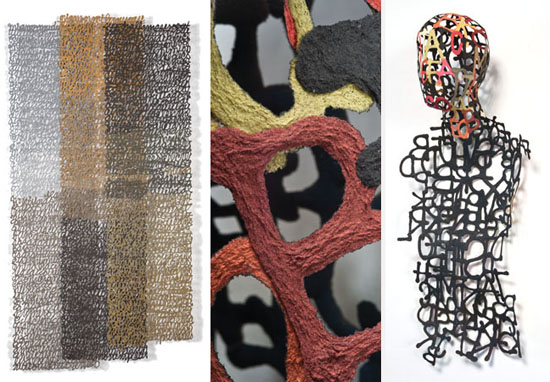 Miriam Londoño studied art at Antioquia University in Medelin, Colombia and at the Arts Academy in Florence, Italy. While she lived in Medelin, Londoño worked as an artistexplained the text from an exhibition earlier this year at Galerie 106 in the Netherlands.”The finished works hang on the wall as transparent paper strips with ornate characters and the words a shadow cast on the wall. The graceful play of light and dark contrasts with the emotional character of the stories described there. This paradox of light and shadow frequently reappear in her work.” Londoño’s work has been exhibited in the US, the UK, and Australia, Europe, Asia and South America. Two of Londoño’s works will be included in  Paperworks: material as medium at the Flinn Gallery at he Greenwich Public Library, Greenwich, Connecticut from May 10th through June 21st, curated by Kelly Eberly and Barbara Richards and browngrotta arts. The Flinn Gallery is in the Greenwich Library, 101 West Putnam Avenue, Greenwich, CT 06830. For more information call: 203.622.7947.