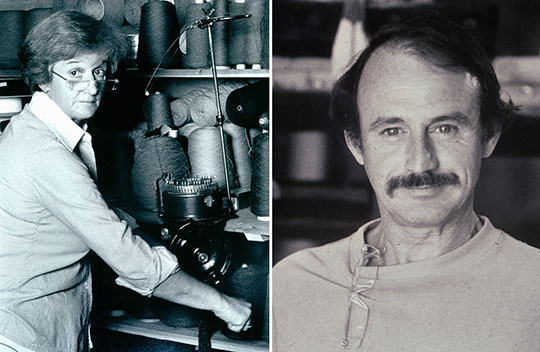 Two-Way Studios – Mariette Rousseau-Vermette and Claude Vermette: Creators of Modern Québec, at the Contemporary Museum of Art at Baie-Saint-Paul, Quebec, invites visitors to wander through more than five decades of artistic creation The art of Mariette Rousseau-Vermette (1926-2006) and Claude Vermette (1930-2006) offers a view of a way of life that emerged in Québec in the late 1950s. Their works were sometimes monumental and could readily be integrated in the architectural context. They express, according to the Museum, a basic tenet of the “Quiet revolution” that aligns cultural production with social progress. Throughout the 60s, these couple merged modernist values and traditional craft, aiming to express a cultural identity that could be both ultra-contemporary and remain respectful of the past. The exhibition displays the production of these two artists in a series of “chapters” themes. Through a chronological approach, viewers are able to make comparisons. The exhibition reveals a common spirit, strong affinities, correspondences, and, of course, emotional and intellectual ties, set within a single historical and sociological context, crossing an important period of recent history. 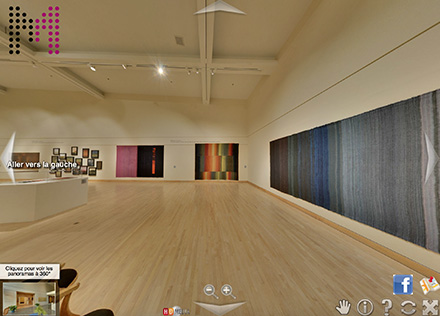 Virtual Exhibition: You can take a video walkthrough of the exhibition and the artists’ separate, but adjacent studios, in Ste. Adele, Canada at: http://www.hdmedia360.ca/english/visite-virtuelle/hd/cbphgpWJl-mac-baie-saint-paul-rousseau-vermette.html. More images: See a review in Vie des Arts Magazine: http://www.viedesarts.com/article790-Precurseurs.

Vermette spent 30 years creating ceramics for architecture — bringing warmth and color to stark, cold constructions. He created new forms of clay composition, modules for tiles and bricks and new patented enamels. These innovations improved the sustainability of ceramics for the Canadian climate and its gruelling winters. His bricks and tiles earned him a First Prize in 1962 for industrial design. His large-scale ceramic compositions grace more than 100 public buildings, including pavilions and buildings connected to the Montreal World’s Fair in 1967, at Osaka in 1970, at the 1976 Summer Olympics held in Montreal. as well as in many schools, churches, courthouses, universities, more than a dozen Montreal subway stations and other buildings, including General Motors in New York City, MacMillan Bloedel in Vancouver and Bell Canada in Toronto. The last 30 years of his career, Vermette devoted to painting. His paintings have been collected and exhibited in Canada and abroad including a 910-foot wall of paintings at Bell Canada’s Trinity Square office in Toronto.

Born in 1926, in Trois-Pistoles, Québec, Mariette Rousseau married Claude Vermette in 1952. She received her training at both the École des beaux-arts du Québec (1944-1948) and at the Oakland College of Arts and Crafts, in California (1948-1949). She and Vermette travelled extensively to Europe and Asia, allowing Rousseau-Vermette to broaden and deepen her understanding of different tapestry techniques. She was honored several times in Québec and abroad, winning numerous awards throughout her career. She has exhibited in Canada, the United States, in several European countries — including at several Lausanne Biennials of International Tapestry — and in Japan. Her tapestries are held in many major public and private collections, including the Metropolitan Museum of Art, in New York, the Chicago Art Institute, the Museum of Modern Art, in Kyoto, the National Gallery of Canada, the Musée national des beaux-arts du Québec and the Contemporary Art Museum of Montréal. She was a member of the Royal Canadian Academy of Arts and an Officer of the Order of Canada. Her storied career was the subject of an article by Anne Newlands, in the Journal of Canadian Art History,“Mariette Rousseau-Vermette: Journey of a Painter-Weaver from the 1940s through the 1960s” (2011). You can watch a video (in French) about a careful restoration and installation of a large Rousseau-Vermette tapestry at Simon’s department store in Montreal at: SIMONS: Des
The Contemporary Museum of Art at Baie-Saint-Paul, Quebec is at 3, rue Ambroise-Fafard, Baie-Saint-Paul, G3Z 2J2. Telephone: (418)435-3681. Fax: (418)435-6269. For more information, visit: http://www.macbsp.com/exhib_tocome.aspx.