Last year was an extraordinary one for those of us who appreciate contemporary art fiber and art textiles. More than 10 exhibitions opened in the US and abroad. In October, the art newspaper reported that “textiles are gaining international stature in art museums” and further that “[c]ommercial interest is on the rise,” quoting art advisor Emily Tsingou: “Textile [art] has entered the mainstream.” Soft Fabrics-Have Solid Appeal. Below is a roundup of exhibitions and reviews from last year and a guide to what to expect in 2015.

Mainstream attention began with the coverage of Sheila Hicks‘ inclusion

in the Whitney Biennial in March and was followed by coverage of the restoration of her remarkable 1960s tapestries at the Ford Foundation in New York Sheila Hicks Tapestries to Again Hang at Ford Foundation. In June, the Art Institute of Chicago’s textile galleries reopened, featuring 96-year-old Ethel Stein’s work, in Ethel Stein, Master Weaver.

September saw three fiber-related exhibitions; the Museum of Arts and Design opened What Would Mrs. Webb Do? A Founder’s Vision (closes 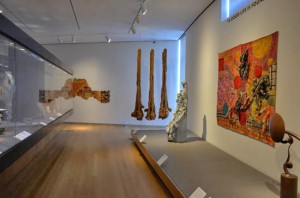 February 8, 2015),Kay Sekimachi, Ed Rossbach, Françoise Grossen, Katherine Westphal and others Museum of Art Design installation of What Would Mrs Webb Do?, Photo by Tom grotta 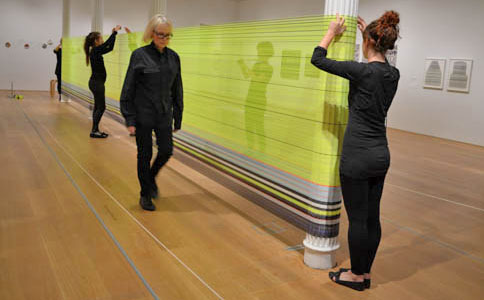 Ann Wilson’s In Situ Performance at the Drawing Center, photo by Tom Grotta

together with a collection of works by Lenore Tawney, Louise Bourgeois and others. Contemporary 108 in Tulsa, Oklahoma, featured a series of large photographic weavings by Aleksandra Stoyanov of the Ukraine 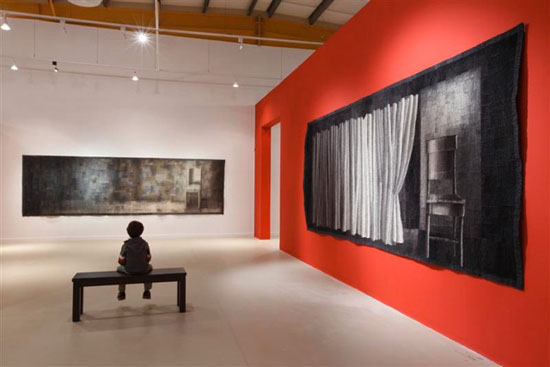 and now Israel, described as “warp and weft paintings.”

In October, Fiber: Sculpture 1960 – present, opened at the Institute of Contemporary Art in Boston with works by 34 artists including 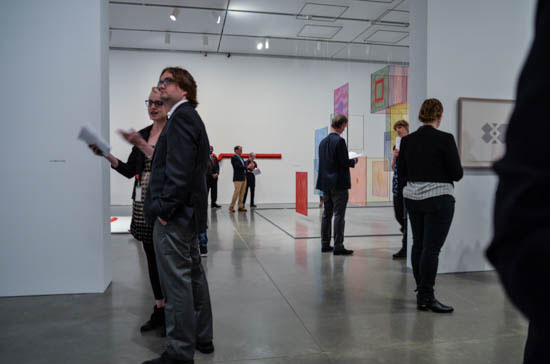 Magdalena Abakanowicz, Ritzi Jacobi and Naomi Kobayashi. The Boston Globe called the exhibition “[s]plendid, viscerally engaging…groundbreaking;” the exhibition catalog (available at browngrotta.com) was pronounced by Blouin art info, “an amazing resource for anyone interested in learning more about the medium.” Art Info – Art in the Air Fiber Sculpture 1960 Present October also saw a survey of the work of sculptor and poet, Richard Tuttle, at the Tate in London, Richard Tuttle:

I Don’t Know, Or The Weave of Textile Language in which Tuttle investigated the importance of textiles throughout history, across his remarkable body of work and into the latest developments in his practice. Tate Modern – Richard Tuttle I Don’t Know or Weave Textile Language

Throughout the year, Innovators and Legends, with work by 50 fiber 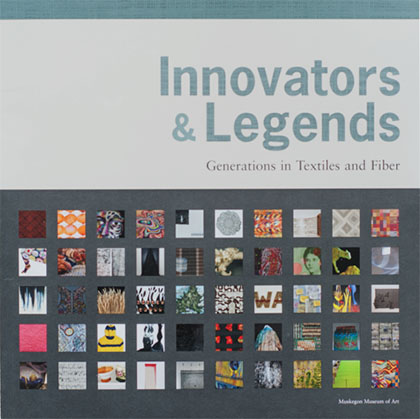 More auctions and exhibitions that include fiber sculpture and art textiles are scheduled for 2015. Fiber: Sculpture 1960 – present will

open at the Wexner Center for the Arts, Columbus, Ohio on February 7th and travel to the Des Moines Art Center, Iowa in May.

Innovators and Legends will open at contemporary 108 in Tulsa, Oklahoma in February, as well. In April, the Tate in London will open The EY Exhibition: Sonia Delaunay, which will show how the artist

dedicated her life to experimenting with color and abstraction, bringing her ideas off the canvas and into the world through tapestry, textiles, mosaic and fashion.

Also in April, the Museum of Arts and Design will host Pathmakers:

In June, the Toms Pauli Foundation in Lausanne, Switzerland will celebrate the International Tapestry Biennials held there from 1962 to

1995 and display work by the Polish textile artist and sculptor Magdalena Abakanowicz, in an exhibition entitled, Objective Station. 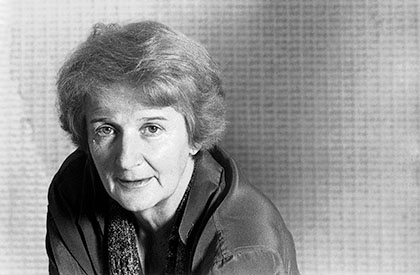 Quebec, Canada will examine the work of Mariette Rousseau-Vermette, who participated in five of the Lausanne Biennials.

From April 24 – May 3, 2015, browngrotta arts will host Influence and Evolution, Fiber Sculpture then and now at our barn/home/gallery space in Wilton, Connecticut. In its 27-year history, browngrotta arts 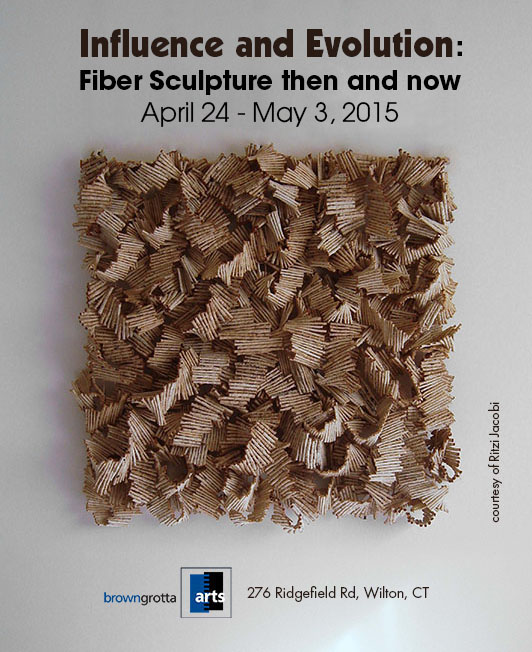 has highlighted a group of artists – Sheila Hicks, Ritzi Jacobi, Lenore Tawney, Ed Rossbach and others – who took textiles off the wall in the 60s and 70s to create three-dimensional fiber sculpture. The influence of their experiments has been felt for decades. Influence and Evolution, Fiber Sculpture then and now, will explore that impact and examine how artists have used textile materials and techniques in the decades since, by juxtaposing works by artists who rebelled against tapestry tradition in the 60s, 70s and 80s, 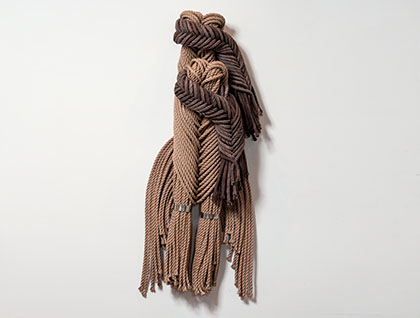 including Magdalena Abakanowicz, Lia Cook, Kay Sekimachi and Françoise Grossen, with works from a later generation of artists, all born after 1960, through whom fiber sculpture continues to evolve. These artists, including María Eugenia Dávila and Eduardo Portillo of Venezuela, Stéphanie Jacques of Belgium and Naoko Serino of Japan, work in a time when classification of medium and material presents less of a constraint and fiber and fiber techniques can be more readily explored for their expressive potential alone.

“It is rare to find so many inventive, compelling works in one show, and it astounds that many are so little known,” wrote Kirsten Swenson in Art in America, about Fiber: Sculpture 1960 – present, in October 2014. Art in America Magazine – reviews: Fiber Sculpture 1960-present. This spring, in Influence and Evolution, browngrotta arts will offer dozens more significant works of fiber art for collectors to appreciate and new audiences to discover — more than two dozen works by fiber pioneers and another 30 more recent fiber explorations. We hope you will visit the exhibition, order the catalog or both. Please contact us for more information about what’s in store. art@browngrotta.com