Art & Identity: A Sense of Place

In our 2019 Art in the Barn exhibition, we asked artists to address the theme of identity. In doing so, several of the participants in Art + Identity: an international view, wrote eloquently about places that have informed their work. For Mary Merkel-Hess, that place is the plains of Iowa, which viewers can feel when viewing her windblown, bladed shapes. A recent work made a vivid red orange was an homage to noted author, Willa Cather’s plains’ description, “the bush that burned with fire and was not consumed,” a view that Merkel-Hess says she has seen.

The late Micheline Beauchemin traveled extensively from her native Montreal. Europe, Asia, the Middle East, all influenced her work but depictions of the St. Lawrence River were a constant thread throughout her career. The river, “has always fascinated me,” she admitted, calling it, “a source of constant wonder” (Micheline Beauchemin, les éditions de passage, 2009). “Under a lemon yellow sky, this river, leaded at certain times, is inhabited in winter, with ice wings without shadows, fragile and stubborn, on which a thousand glittering lights change their colors in an apparent immobility.” To replicate these effects, she incorporated unexpected materials like glass, aluminum and acrylic blocks that glitter and reflect light and metallic threads to translate light of frost and ice.

Mérida, Venezuela, the place they live, and can always come back to, has been a primary influence on Eduardo Portillo’s and Maria Davila’s way of thinking, life and work. Its geography and people have given them a strong sense of place. Mérida is deep in the Andes Mountains, and the artists have been exploring this countryside for years. Centuries-old switchback trails or “chains” that historically helped to divide farms and provide a mountain path for farm animals have recently provided inspiration and the theme for a body of work, entitled Within the Mountains. Nebula, the first work from this group of textiles, is owned by the Cooper Hewitt Museum.

Birgit Birkkjaer’s Ode for the Ocean is composed of many small woven boxes with items from the sea — stones, shells, fossils and so on — on their lids. ” It started as a diary-project when we moved to the sea some years ago,” she explains. “We moved from an area with woods, and as I have always used materials from the place where I live and where I travel, it was obvious I needed now to draw sea-related elements into my art work.”

“I am born and raised in the Northeast,” says Polly Barton, “trained to weave in Japan, and have lived most of my life in the American Southwest. These disparate places find connection in the woven fabric that is my art, the internal reflections of landscape.” In works like Continuum i, ii, iii, Barton uses woven ikat as her “paintbrush,” to study native Southwestern sandstone. Nature’s shifting elements etched into the stone’s layered fascia reveal the bands of time. “Likewise, in threads dyed and woven, my essence is set in stone.”

For Paul Furneaux, geographic influences are varied, including time spent in Mexico, at Norwegian fjords and then, Japan, where he studied Japanese woodblock, Mokuhanga “After a workshop in Tokyo,” he writes, “I found myself in a beautful hidden-away park that I had found when I first studied there, soft cherry blossom interspersed with brutal modern architecture. When I returned to Scotland, I had forms made for me in tulip wood that I sealed and painted white. I spaced them on the wall, trying to recapture the moment. The forms say something about the architecture of those buildings but also imbue the soft sensual beauty of the trees, the park, the blossom, the soft evening light touching the sides of the harsh glass and concrete blocks.”

April 11, 2018 arttextstyle0 Comment
Blue/Green: color/code/context opens at browngrotta arts, 276 Ridgefield Road, Wilton, Connecticut on April 28th (1 pm to 6 pm). Featured in the exhibition are more than 50 artists, including two new to browngrotta arts, Micheline Beauchemin of Canada and Polly Barton from the US. 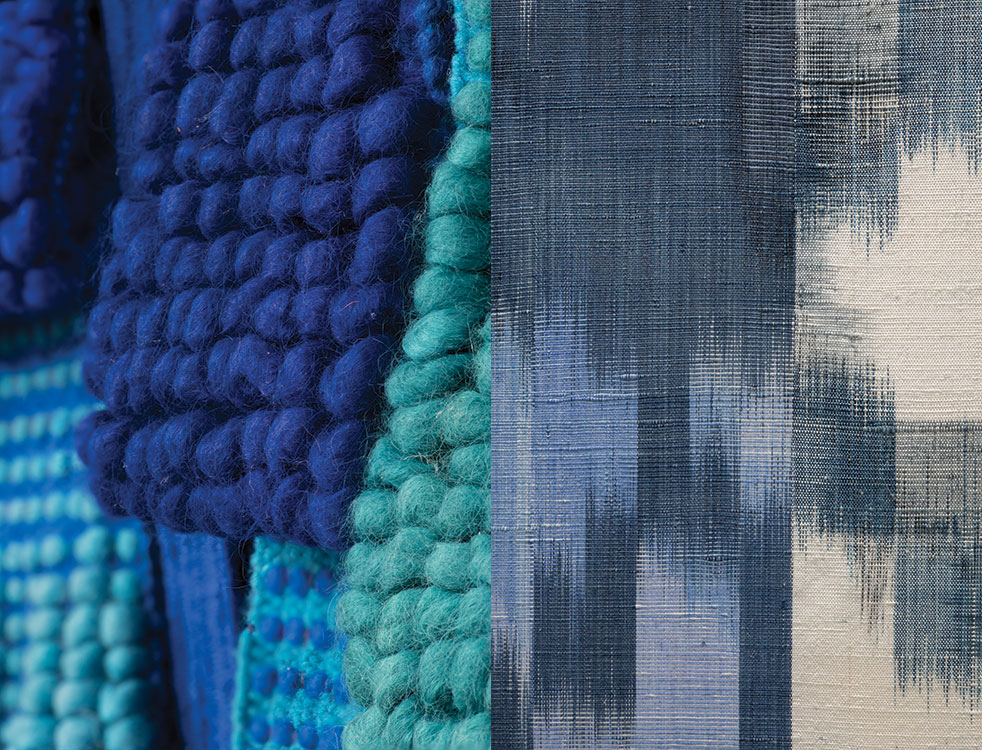 Beauchemin began her career making stained-glass windows but early on turned to weaving and embroidering spectacular wall hangings in vibrant colors, including blues and greens. traveled and studied in Japan, China, India, North Africa, the Canadian Arctic and the Andes, adding depth and mystery to the love of light, water, wings and nets that is evident in her body of work. She created a number of important commissions throughout Canada, including an acrylic curtain for the Grande Salle of the Théâtre Maisonneuve at Place des Arts in Montréal (1963-1967) a curtain for the National Arts Centre in Ottawa (1966-1969), tapestries for Queen’s Park in Toronto (1968-1969), the Hudson’s Bay Company in Winnipeg (1970) and the Canadian pavilion at the 1970 World’s Fair in Osaka, Japan. She participated in the 10th Lausanne Biennial, was elected to the Royal Canadian Academy of Arts and was awarded the Governor General’s Award in Visual and Media Arts. A book about Beauchemin, her life and works, Micheline Beauchemin: Je rêvais de tapisseries à la grandeur des cathédrales, à la largeur de nos rivières (roughly, I dreamed of tapestries, as wide as rivers, throughout cathedrals) can be purchased through our website at http://store.browngrotta.com/books/
Polly Barton is a US artist known for adapting the ancient weaving technique of ikat into contemporary woven imagery. She has provided an ikat of silk, Pillar of Cloud, for Blue/Green: color/code/context. As a young artist, Barton worked as a personal assistant to Helen Frankenthaler. She cites that experience as a formative one, where she learned firsthand the inner drive, resilience, and intention necessary for an artist. The year also introduced her to the challenges and rewards of the New York art world. In 1981, she moved to Kameoka, Japan and lived in the religious heart of the Oomoto Foundation to study with master weaver, Tomohiko Inoue. In Kameoka, she practiced tea ceremony, calligraphy and Noh Drama with Oomoto’s master teachers. Barton has shown her woven ikats on both coasts. Her works are in the permanent collections of the Art Institute of Chicago, the Boston Museum of Fine Arts, and the Mint Museum among others.
Blue/Green: color/code/context opens on April 28th for just 10 days. The 140-page color catalog will be available on the 28th at browngrotta.com.
Details: Opening and Artists Reception, Saturday, April 28th, 1-6 pm; Sunday April 29th – Sunday May 6th, Hours: 10-5 pm. For more info: http://www.browngrotta.com/Pages/calendar.php; 203-834-0623.