Out and About: Grethe Wittrock’s Reception and Lecture at Fuller Craft Museum

We were pleased to catch up with Grethe Wittrock and fans of her work at the Fuller Craft Museum yesterday, to hear her speak and to celebrate the opening of her first solo exhibition the US. 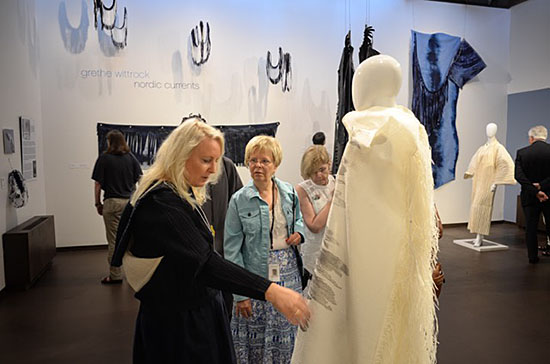 The installation, of sails that Wittrock has re-purposed and re-envisioned, dyed and cut, is dramatic, its shifting shadows giving visitors a sense of being near the sea. 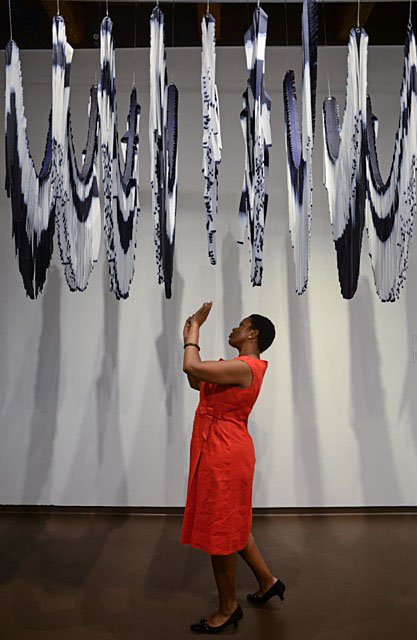 In her lecture, Wittrock spoke about this work and about her initial SAIL project at the Danish Arts Workshops using sails from the training vessel Georg Stage, which is moored at Holmen in Copenhagen in between cruises. Wittrock began by punching holes and tying knots through the sails to create designs and then transitioned to painting and dying them an finally to cutting sails and sailcloth to resemble bird wings. 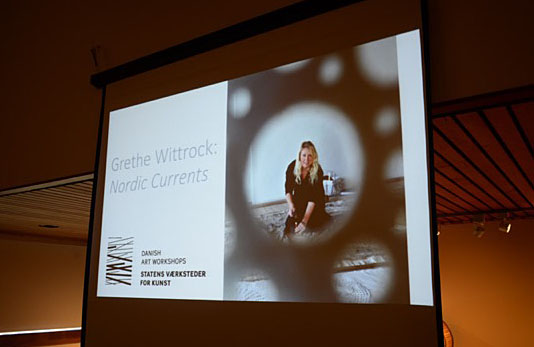 The maritime signal colors of neon orange and yellow are the dominating colors in the project, and patterns representing rope bindings, nautical maps and underwater seascapes are transferred by means of printing and perforation. Wittrock’s dual goal is to shape the material in accordance with her idea while also incorporating the potential and expression of the material itself. The SAIL project is based on a piece of age-old utilitarian textile that has served in all sorts of wind and weather conditions, and which is a carrier of stories from voyages to destinations near and far.

Wittrock explained that she grew up near a stony shore and sea and sky, stones and birds are consistent influences in her work.The exhibition, Grethe Wittrock: Nordic Currents, is at the Fuller through January 31, 2015, 455 Oak Street, Brockton, MA. http://fullercraft.org/event/nordic-currents-grethe-wittrock/