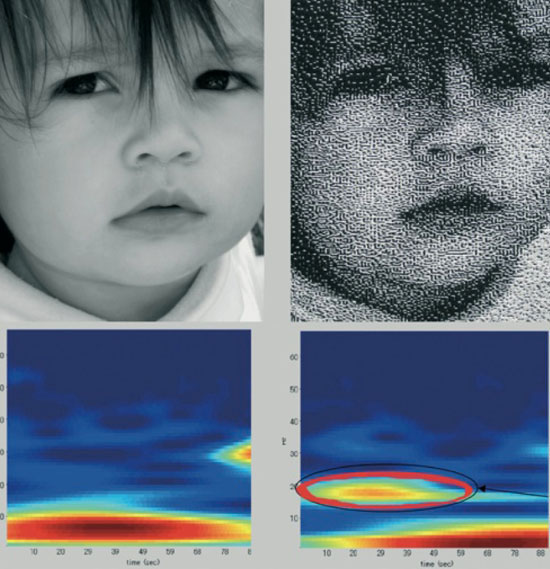 Last week advocates were on Capitol Hill urging additional funding for arts programs with a series of subjective arguments — the arts enrich lives, enhance communities and assist at-risk kids struggling to stay in school. With the help of scientists at the University of Pittsburgh, however, artist Lia Cook has been able to quantify that impact by obtaining an objective measurements of viewers’ reactions to her work. As an artist-in-residence at the University’s TREND program (Transdisciplinary Research in Emotion, Neuroscience and Development, Department of Psychiatry, School of Medicine) Cook was able to compare the emotional responses of viewers of a flat photographic image of a human face versus the reaction to her works, large woven faces that look photographic at a distance but dissolve into maze patterns up close and finally into visibly interacting threads. Cook’s original hypothesis was that the woven interpretation of the face would result in a different emotional response compared to a flat photographic print. “I wanted to explore the nature of people’s emotional connection to woven faces,” she explains. “I thought that the material and structural aspects of the textile, the physical evidence of the hand and the memories associated with these tactile experiences might intensify the reactions. Something about the textile engenders embodied emotional response beyond that of the two–dimensional photo.” 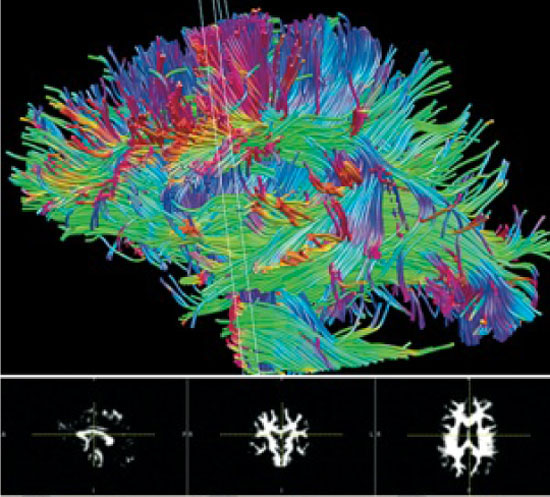 To obtain the data necessary to test this hypothesis, Cook, in collaboration with scientists at TREND tried several approaches, including electroencephalography (EEG), Pupil Studies, EyeTracking and Functional Magnetic Resonance Imaging (fMRI). The hypothesis was confirmed, Cook and the scientists could see noticeable differences in individual images from the fMRI data and in records of electrical brain activity from EEG when volunteers compared flat and woven images. Through the project Cook was not only able to answer her initial questions, but she began to create new work inspired by the experience. She noticed, for example that the fibers of the brain visible when using Diffusion Spectrum Imaging were similar to the interlacing fibers of textile constructions. She underwent this imaging on herself and then, using software from MGH/Harvard, Biomedical Imaging Lab, she was able to manipulate the images of these images as a starting point for her latest weavings, which combine faces and images of brain fibers. The result is in keeping with the aim of the TREND residency, which hopes that artists will encourage scientists to think in new creative ways while learning the tools of the scientist to develop their artistic ideas or to look at their art work in new ways. Cook’s description of her experiments. “An Investigation: Woven Faces and Neuroscience,” appeared in the December issue of ETN Textile Form http://www.exacteditions.com/exact/browse/573/911/7936/2/44?dps=on. 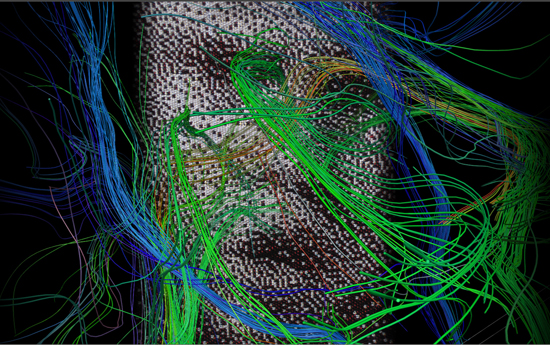 From April 15 to October 22, 2011, a solo exhibition of Cook’s work, including some of the works created since the TREND residency, will open at the Society for Contemporary Craft in Pittsburgh as part of the Bridge 11 Exhibition Series.  On May 5th,  Cook and Dr. Greg Siegle of the University of Pittsburgh School of Medicine will present a lecture,”Woven Faces, Mapping the Emotional Brain,” at 6 pm.  Hours are Monday through Saturday, 10—5 pm. For more information, visit www.contemporarycraft.org or call 412.261.7003 x 26.