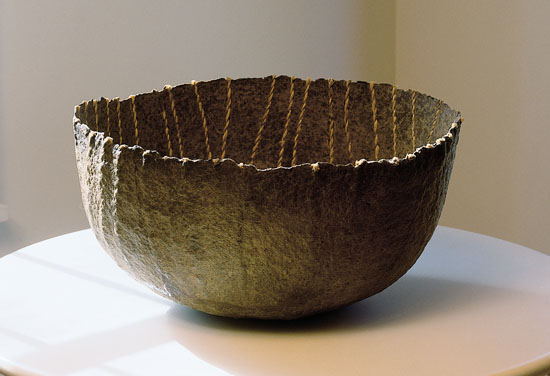 “I always think of my art like a dance – it leads and I follow. 1966, my second semester in college, just out of high school, I took an Introduction to Art class. The instructor introduced a medley of visual art projects, and two were textile related. I spent late nights in the living rocm weaving on the large frame loom I built in class. I actually coaxed my mother to help me embroider on the other textile project I designed. She dyed it, and I only felt a little bit guilty. She and I would chat into the evening instead of being glued to the TV. In 1973, when I moved north from southern California to Healdsburg, I discovered the Pomo culture. In my first basketry class at the local “Indian School,” Mabel McKay, instructor and tribal leader, asked me if I had an awl. She showed me hers, passed down for generations. I returned to the next class with an altered antique screwdriver I turned on a grinder and then finely sanded into a very authentic awl. She was impressed, and I saw my artistic path continuing ahead of me. I still use my awl as I assemble my vessels.

When the gallery and museum world opened up to me as I finished undergraduate work ,and continued to be there for me through graduate school and beyond, the memories that attached to my soul were the complimentary notes often written on the packing of a returning art piece. I also remember New York gallery owner, Warren Hadler, bent way over at an exhibit with his head all the way inside a very large paper vessel I’d made in graduate school. 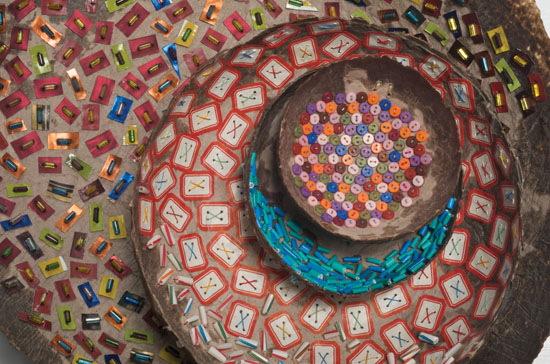 Detail of Thrums 2007 by Sylvia Seventy, photo by Tom Grotta

Mildred Constantine, former curator at MOMA, stopped a slide show at’ the Allrich Gallery in San Francisco to ask, ‘Who made the paper baskets?’ Restaurateur John Ash, on returning from New York years ago finally reached me after numerous telephone messages asking me to call. After our telephone-tag he told me he saw my ‘beautiful work in New York’ and couldn’t believe I actually lived in Healdsburg.

Once, I shipped 11 paper vessels in two huge boxes via the Healdsburg Greyhound bus depot/office for an art exhibition in Manhattan at the Elements Gallery. Despite giving a three-week lead time, the boxes arrived DURING THE OPENING RECEPTION and for weeks I received notes from those who attended inquiring how had I managed to orchestrate such a ‘grand entrance?’

And, I remember for many years, galleries not wanting to mention that my vessels were made of ‘recycled paper,’ even though it was always part of my contemporary hunter-gatherer concept.”