Home / Lia Cook: In the Folds

Tag: Lia Cook: In the Folds

Lia Cook is a relentless innovator who has been involved in textile experimentation since her graduate and undergraduate work in Arts and Design at the University of California, Berkeley in the 1970s.

While Cook has created varied bodies of work in her storied career, her explorations have a consistent theme. They all involve the experience of touch, the sensation of the body and the physicality of cloth. “Cook’s work defies the ‘ocular-centricity’ of Western art by overturning the hierarchy of the senses and repositioning the sense of touch in the foreground. While the work is never handled in the gallery or museum, the sense of touch is so fully activated that the experience of the work is startlingly touch-sensory,” writes Deborah Valoma, in Lia Cook: In the Folds — Works from 1973 – 1997.

Cook’s early work aimed to envelop the viewer in monumental cloth. “The work was imposing, strident and typically employed magnified imagery of weave patterns as the subject,” writes Valoma, “depicting both in realization and representation the structural realities of weaving.” Space-Dyed Weaving-2, created in 1975, is an example of work from this period. So is Spatial Ikat III-2, the prize for the winner of our Art for a Cause 2021 sweepstakes with UncommonGood (uncommongood.io.), which continues through July 31st.

In the 1980s, cook turned her attention to textile structures — curtains, pockets and crazy quilts. Through the Curtain in 5 Scenes Transposed, which hints at curtains on a stage, is from this period. In the 1990s, Cook created works that took inspiration from images of fabric painted during the Renaissance, when images of drapery were an essential part of a painter’s training.

As Valoma describes, in works like Material Pleasures, created in 1993, Cook painted the imagery of draped fabrics on linen or abaca with acrylics or oil paints. The canvases were finely stripped and inserted as weft into hand-painted warps and woven on a 32-harness loom, purposefully defying conventional definitions.

In the mid-90s, after two artists-in-residencies, one in Italy and one in Germany, Cook’s work took yet another turn — focusing on the Jacquard loom and incorporating photography, to create works that were narrative and personal. This body of works was featured in The Embedded Portrait, her solo exhibition at the University of Wyoming Art Gallery in 2009.

In 2010, Cook’s shifts again. As an artist-in-residence at the University’of Pittsburgh’s TREND program (Transdisciplinary Research in Emotion, Neuroscience and Development, Department of Psychiatry, School of Medicine), Cook was able to compare the emotional responses of viewers to actual photographs and to her weavings of photo images “I wanted to explore the nature of people’s emotional connection to woven faces,” she explains. “I thought that the material and structural aspects of the textile, the physical evidence of the hand and the memories associated with these tactile experiences might intensify the reactions. Something about the textile engenders embodied emotional response beyond that of the two–dimensional photo.”

To test her hypothesis, Cook, in collaboration with scientists at TREND tried several approaches. Cook and the scientists could see noticeable differences in individual images from MRI data and in records of electrical brain activity from EEGs when volunteers compared flat and woven images. She underwent this MRI imaging on herself and then, using software from MGH/Harvard, Biomedical Imaging Lab, she manipulated the images for a series of weavings that combine faces and images of brain fibers, as you can see in Neural Networks, 2011.

Cook’s experiments in neuroaesthetics continue — and as always, she makes adjustments and changes her gaze to produce something new. Recently, she has merged three fibers into her imagery — neural fibers, plant fibers and the parallel lines that she used in the 1970s. “Art and science are more similar in their process than many people think,” says Cook. “Each requires starting with a question, being curious, discovering something new, being willing to take the answers or lack of answers — good or bad — and building on that for the future.”

Anniversary Alert: 30 Years of Catalogs – 30 Days to Save

November 30, 2017 arttextstyle0 Comment
From November 30th to December 31st, buy three or more browngrotta arts catalogs and save 10% on your order. In addition, for each sale made during that period, browngrotta arts will make a donation to the International Child Art Foundation https://www.icaf.org. 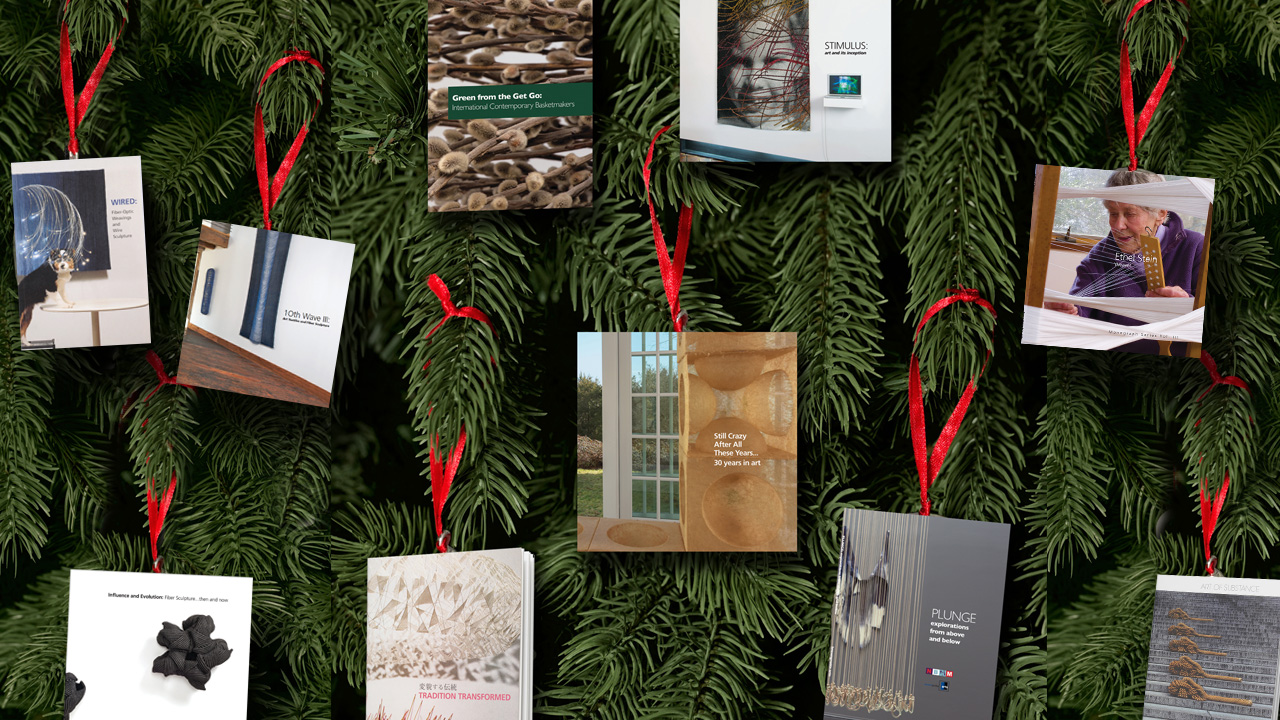 In its 30 years promoting contemporary decorative art, browngrotta arts has produced 47 catalogs, 45 of which are still available. Readers have been appreciative: Artist, collector, curator, Jack Lenor Larsen, wrote that “… catalogs produced by browngrotta, and the photography therein, have become so superior, they are an important part of our literature.” Lotus Stack, formerly Curator of Textiles at the Minneapolis Institute of Art, noted that our publications, “consistently engage much more than readers’ minds.”
All of our volumes are heavy on images. Some highlight work by one or two artists, including Lenore Tawney, Ed Rossbach and Kay Sekimachi. Others, like Beyond Weaving, International Contemporary ArtTextiles, Influence and Evolution and Green from the Get Go, offer insights on materials, themes and influences. Here’s your chance to explore an artist or an era, fill any gaps in your collection or order a full set (a special discount applies to the purchase of all 45).
Our catalogs fall into four loose categories: those about individual artists, those that take a geographic perspective, those designed around a specific artistic theme, and survey publications, that look at a grouping of artists or work over a period of time. 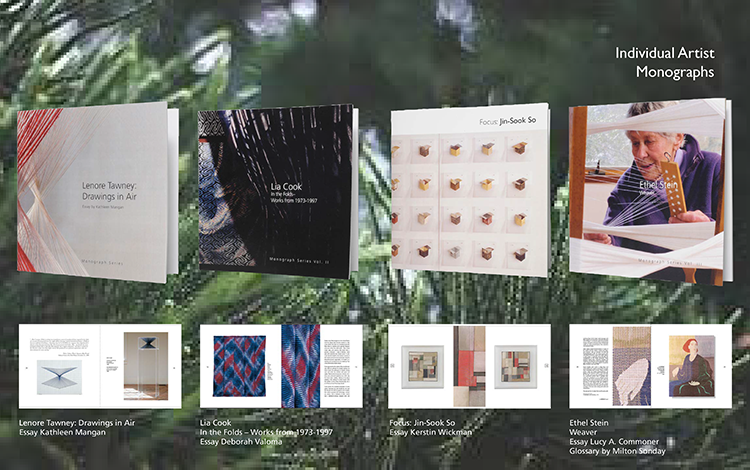 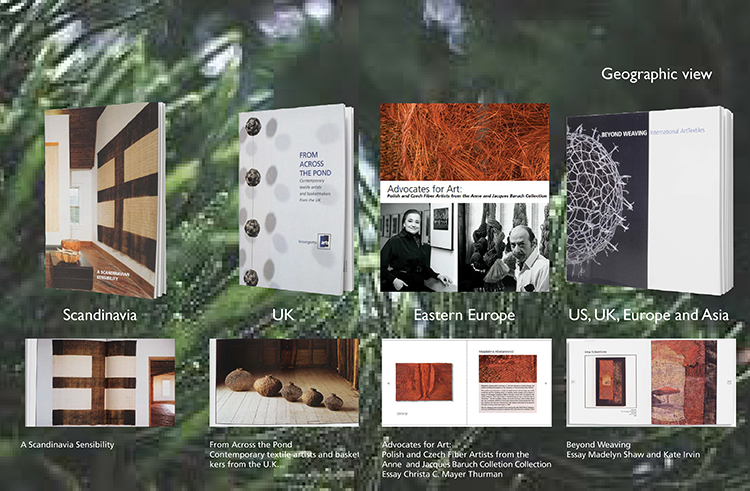 Geographic focus:
We work with artists in several countries and have compiled their works in seven catalogs that provide viewers a sense of how contemporary art textiles have evolved in various locales. These include three exploring Japanese textiles and basketry: Sheila Hicks Joined by seven friends from Japan; Traditions Transformed: Contemporary Japanese Textiles & Fiber Sculpture; and Japan Under the Influence: Japanese basketmakers deconstruct transition, which features Hisako Sekijima and the artists she has influenced. It also includes A Scandinavian Sensibility, featuring 15 artists (an exhibition that traveled to the North Dakota Museum of Art), From Across the Pond, featuring artists from the UK, Advocates for the Arts: Polish and Czech Fiber Artists from the Anne and Jacques Baruch Foundation Collection and one international volume: Beyond Weaving: Contemporary ArtTextiles. 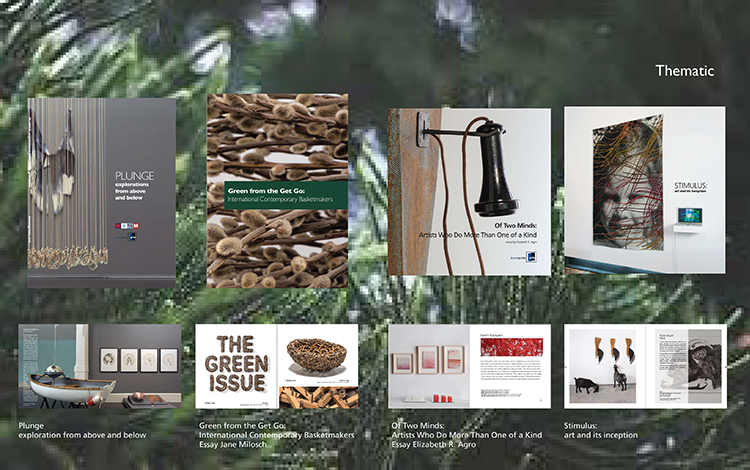 Thematic:
For several exhibitions we asked artists to consider a particular material, approach or influence. This list of catalogs includes: Plunge, Green from the Get Go: International Contemporary Basketmakers, Of Two Minds: Artists Who Do More Than One of a Kind, Stimulus: Art and Its Inception, On Paper, Wired, featuring works made of metals and Art of Substance, which won an AIA design award, and which highlights large-scale works. 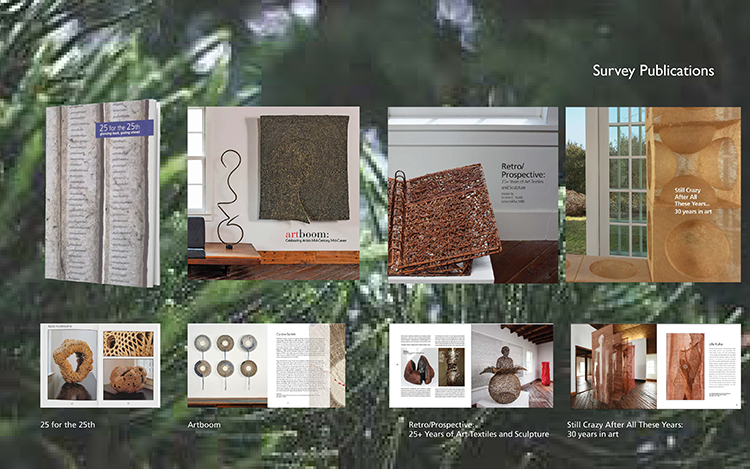 Survey publications:
Our first survey publications, 10th Wave Part 1: New Baskets and Freestanding Sculpture and 10th Wave Part 2: New Textiles and Fiber Wall Art, which provided “states of the art” reviews, were produced in 1997, 10th Wave III: Art Textiles and Fiber Sculpture followed in 2009. In between and since we have published Influence and Evolution: Fiber Sculpture…then and now – a look at fiber from the 60s to the present, 25 for the 25th; Artboom – baby boomer artists reflect on their art; Retro/Prospective: 25+ Years of Art Textiles and Sculpture and this past year, Still Crazy After All These Years: 30 years in art.
Take this opportunity to stock up! (Call us for a special price on the full set of 45 catalogs 203-834-0623.)