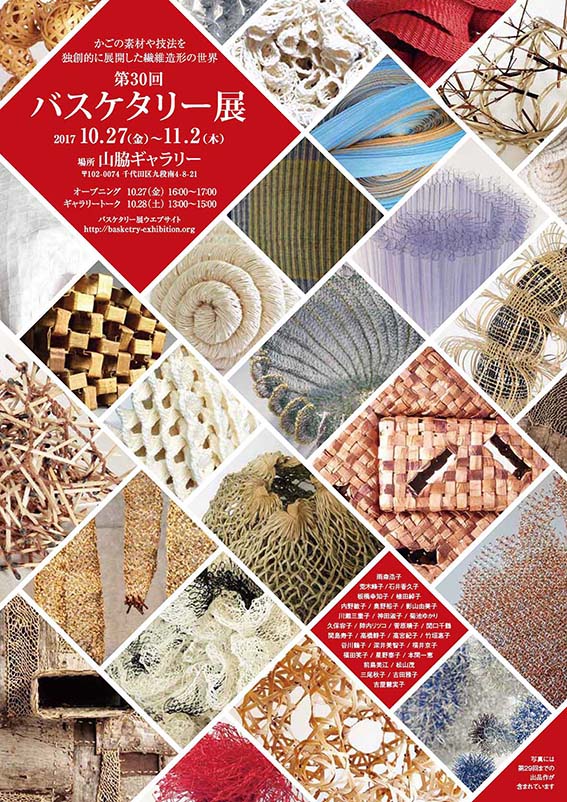 Poster from this year’s Basketry Exhibition

“In Japan,” writes influential basketmaker Hisako Sekijima,”the idea of making ‘non-utilitarian baskets’ is still not so properly appreciated  even after 30 years!!”  Undaunted, for three decades, Sekijima and a loosely organized group of 80 or so other artists have continued to pursue what she calls contemporary basketmaking, but the Victoria & Albert Museum terms a “journey of radical experimentation,” maintaining a website, newsletter and mounting an annual exhibition in the process. For the 30th anniversary of this exhibition at the Yamawaki Gallery, Chiyoda-Ku, Tokyo, this fall, Sekijima wrote text to refresh insider artists’ vision and to expand the understanding of outsiders, artists and their audience. The statement below is adapted from that text.
Contemporary Basketry Influences
Ed Rossbach’s Baskets as Textile Art lead to a surge of contemporary basketmaking in 1970s.  The notion of baskets, as stated well in its title, has been spreading and stimulating basketmakers’ creative minds beyond US, to other countries in the world. In Japan, basketmakers have committed significantly to this worldwide, challenging trend in the last 30 years. Their output has been found in show catalogs as well as international publications, for example, those published by browngrotta arts.
I can explain first, why this notion of baskets is new and also, why it was taken up with interest by a wide range of makers. Prior to the 70s, baskets had been discussed either in terms of ethnology/folk culture or in relation of certain local traditional connoisseurship in tea ceremony, flower arrangement and daily life style design. In Rossbach’s book baskets were re-evaluated beyond those local cultural and historical confinements. That is, baskets were abstracted in their formal or conceptual expressive possibility. Baskets came to be challenged from various angles without consideration of conventional requirements. More recent results of this challenge include exploration of new material/structure, or of new spatial expression of linear elements.
The 90s
In 1999, at Yokohama Art Museum, an exhibition, Weaving the World, presented a term, “contemporary art of linear construction” to link a wide range of artistic expressions from artists including John McQueen, Norma Minkowitz, Hisako Sekijima, Kyoko Kumai along with Martin Puryear, Richard Deacon and Oliver Herring. This new context resulted in a fresh look of sculptural works which were not carved nor molded but made of linear substances. Baskets and fiber arts spoke clearly there. 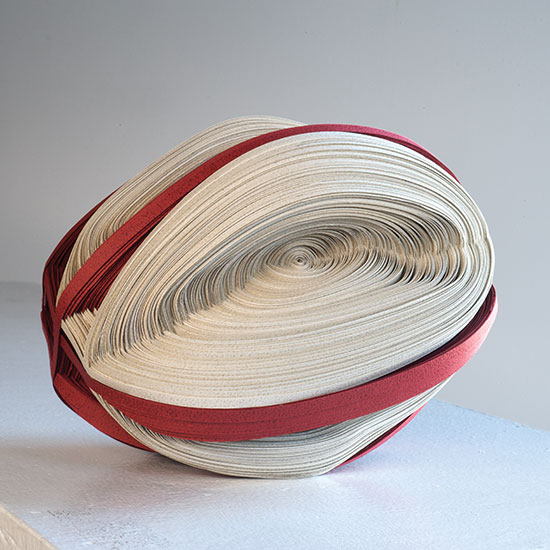 The Present
More recently, in April 2017, I saw Women Artists in Post-War Abstraction at the Museum of Modern Art in New York, another show affirming the dawn of contemporary textile arts as an abstract expression. Under the category of “Reductive Abstraction” were combined works by Abakanowicz, Anni Albers, Sheila Hicks and Kay Sekimachi.  Well expressed by the works in the exhibition was these artists’ eager search for abstract expression, which they did by depriving textile techniques of conventional functions, materials and pictorial patterns. Though Rossbach was not there in the show featuring “women artists,” I was sure his new attitude toward baskets was rooted in the same soil.
Our Basketry Exhibition Group
Through 1980, I explored basketmaking, especially focusing on the interplay of material and structural mechanism.  And I started a class to introduce a conceptual approach to basketmaking in Japan. Some of my students from that period have been presiding over an annual basketry show since then to cultivate a new ground in Japan. The first show was held at Senbikiya Gallery, Chuo-ku Tokyo in 1986.The objective was then, and still is now, to generate mutual learning and promotion. In Japan, compared with the government-supported field for traditional art bamboo basketry and mingei folk basketry, the field for the contemporary basketry remains small and still not well known. The group avoided forming a so-called art/craft association or exclusive school of a core artist. I knew that in the Japanese cultural climate such attempts had seen quick rise and fall in a short time, for the exclusive/authoritative nature of organizations tends to distort its original ideal. It is a shared regard that binds our group and the conviction that each should be a leader to oneself and to the group, besides being a creative basketmaker. 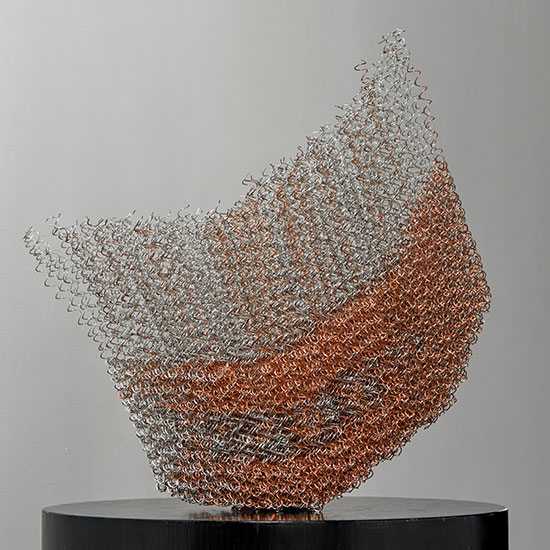 Cooperative Administration
We’ve aimed to keep the group healthy and growing.  A kind of standing committee is organized for each exhibition. Administrative jobs and budgets are shared equally and paid accordingly among the participants. Besides entry fees, the sales of the catalog and a 10% commission from sold works cover the costs. Often we win an invitational support or a subsidiary discount of the rental fee from galleries or art schools. Over time, the regular participants have learned to create show announcements and catalog booklets by computer and to set up a job grading for payment to the respective participants for contributed works. And all of the participants are now able to submit their own pages in digital data to a catalog editor. Each participant has individual pages of work and a statement of intent in the catalog.
For new entries, anyone can submit a portfolio one year in advance. These are reviewed by all of the exhibitors during the ongoing show.  Considerations are made not only for the work but also for the administrative contributions. It is not a juried show, but each participant should be responsible to preserve or better the quality of the show both aesthetically and operationally. Eighty artists have participated over the years — about 30-40 artists participate each year. Participants have included Noriko Takamiya, Kazue Honnma, Tsuruko Tanikawa, Chizu Sekiguchi, Hisako Sekijima,  Shoko Fukuda, Masako Yoshida, Shigeru Matsuyama, Rittsuko Jinnouchi, Nobuko Ueda, Haruko Sugawara. 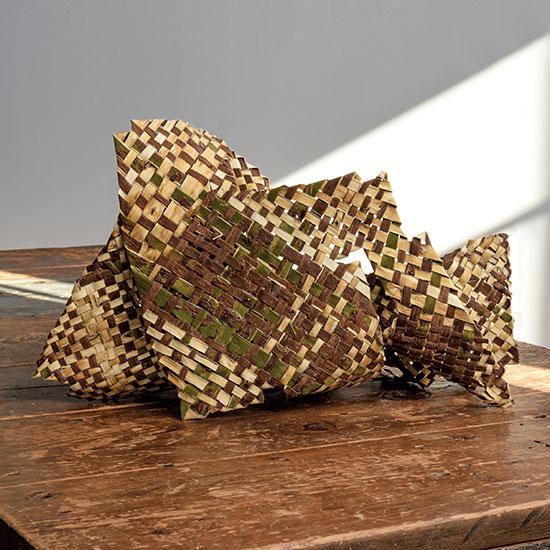 Into the Future
Long-time participants such as Noriko Takamiya, Kazue Honma, Tsuruko Tanikawa and me have adopted our own co-operational, open system to keep the show going. We have been careful that this group activity not be for the benefit of exclusive members but should promote independent creative minds through basketmaking. Besides the annual exhibition, Kazue Honma’s editorship of Basketry News Letter and Noriko Takamiya’s handling of our website have been instrumental in keeping this loose group intact. The long list of topics include not only international exhibitions but also iworkhops, technical analysis into structure, experiments/researches of plants, accomplishments in archaeological reproduction and social commitments in developing countries.This year 350 people attended the exhibition, including art writer Janet Koplos and Scandinavian artists, Ingrid Becker and Kristin Opem and Professor Wu, Pei-shan, and students from the Textile Section of the Graduate Institute of Applied Arts of Tainan National University of Arts.
We wish Sekijima and her fellow artists another creative and inspiring 30 years! 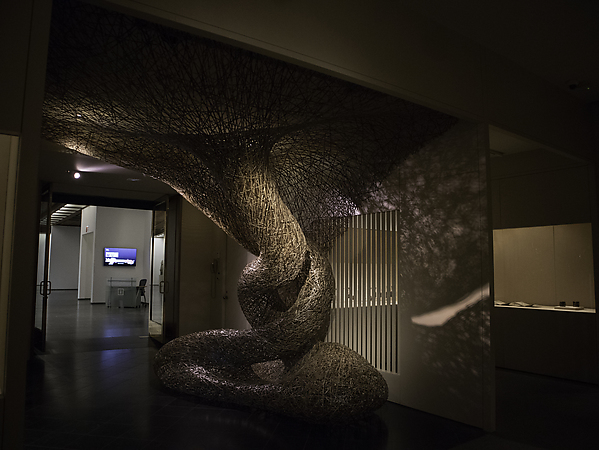 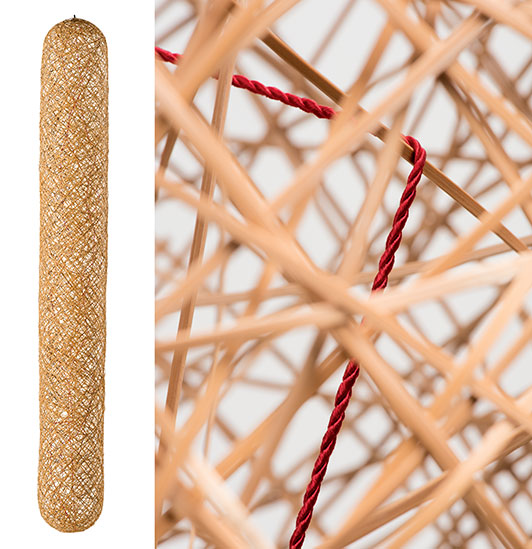